Google Pixel 4a vs OnePlus Nord - PhoneArena
Save on Galaxy S22/+

Google Pixel 4a vs OnePlus Nord

Android Google OnePlus
Joshua Swingle @joshuaswingle
8
We may earn a commission if you make a purchase from the links on this page.
The OnePlus Nord and Google Pixel 4a are two of the best midrange smartphones on the market right now and offer a potentially unrivaled value for money. But with the products priced so similarly, we thought it would be worth comparing the two to see which is better.

Google’s phone, despite being priced at only £349 in the UK and €349-389 in Europe, does what all Pixels do best – take amazing photos. It easily beats the OnePlus and proves yet again that extra cameras don’t always mean better.
But the Nord – priced at £379 and €399 – does have some tricks up its sleeves. It feels much quicker than the Pixel thanks to its faster chipset, 90Hz display, and software optimizations. The device also boasts better battery life and a more premium-feeling design.
So, which of the two is better? It ultimately comes down to personal preference. If you want a compact phone or one that takes amazing photos, the Pixel 4a is the one for you. But if you’d prefer a smoother experience, better battery life, and a bigger display; the Nord is definitely worth the extra cash.
Buy the OnePlus Nord here
Buy the Google Pixel 4a: Best Buy | Amazon | Google Store

The OnePlus and Pixel couldn’t be any more different from a visual perspective if the manufacturers tried, despite their very similar price points.
Like so many other devices on the market, Google’s one has been carved almost entirely out of plastic. But rather than choosing a cheap-feeling glossy finish, the company has selected a matte black coating that feels much nicer to hold.
There is also a mint green-colored power key on the right, although it looks white in most situations. As for sizing, that is perhaps what most makes the Google Pixel 4a stand out from the crowd.
Google Pixel 4a
Dimensions

See the full Google Pixel 4a vs OnePlus Nord size comparison or compare them to other phones using our Size Comparison tool.
It measures in at only 144 x 69.4 x 8.2 mm, making it one of the most compact smartphones around. It's roughly the same size as the Apple iPhone 11 Pro and Samsung Galaxy S10e.
The OnePlus Nord, on the other hand, is the complete opposite of everything described above. The product features a glass panel on the rear which, although less durable than plastic, feels more flagship-like in the hand.
It’s much, much bigger too. The Nord measures in at 158.3 x 73.3 x 8.2 mm and is better compared to the Samsung Galaxy S20+ and Apple iPhone 11 Pro Max.
Another area where the OnePlus differs from the Pixel is button placement. Whereas the latter has the power key and volume rocker on the right, OnePlus has moved its volume rocker over to the left to make room for its signature Alert Slider on the right.
Google’s buttons are more tactile and feel sturdier, in case you’re wondering.

OnePlus has fitted its smartphone with a 6.5-inch Fluid AMOLED panel complete with a pill-shaped hole. Google has gone the other way by selecting a 5.8-inch display coupled with a smaller, more subtle punch hole.
The bezel situation is more or less identical with both products offering relatively slim implementations. Removing all of that from the equation, though, it’s fair to say the OnePlus Nord has the superior panel of the two.
Its display is much brighter, which allows for better viewing in direct sunlight, and supports a 90Hz refresh rate. The latter is often associated with premium devices and makes everything from the interface to apps look and feel both faster and smoother.
Google’s Pixel 4a display looks mediocre at best but it does offer one benefit over the Nord – colors are represented more accurately.
As for the speakers, the OnePlus Nord ones are louder but lack bass, whereas the Pixel 4a offers the latter at the expense of volume.
Display measurements and quality
View all
The CIE 1931 xy color gamut chart represents the set (area) of colors that a display can reproduce, with the sRGB colorspace (the highlighted triangle) serving as reference. The chart also provides a visual representation of a display's color accuracy. The small squares across the boundaries of the triangle are the reference points for the various colors, while the small dots are the actual measurements. Ideally, each dot should be positioned on top of its respective square. The 'x: CIE31' and 'y: CIE31' values in the table below the chart indicate the position of each measurement on the chart. 'Y' shows the luminance (in nits) of each measured color, while 'Target Y' is the desired luminance level for that color. Finally, 'ΔE 2000' is the Delta E value of the measured color. Delta E values of below 2 are ideal. 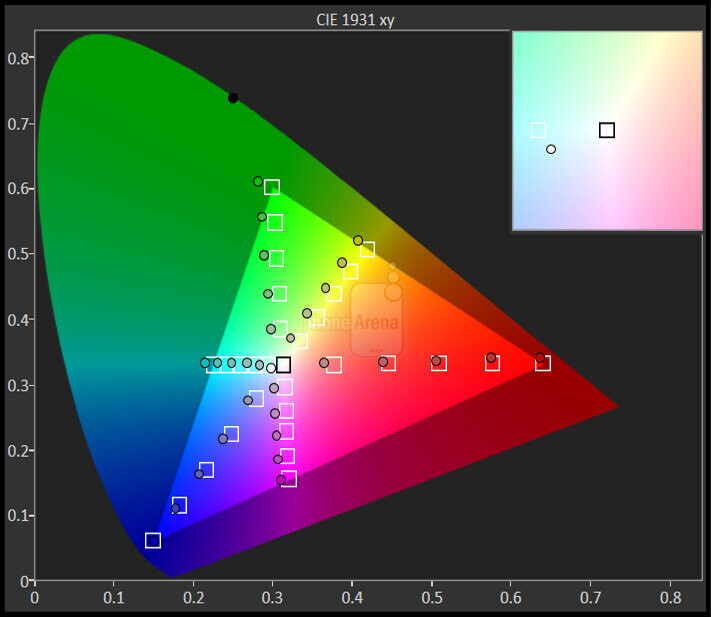 The Pixel 4a is available in a single 6/128GB variant and arrives powered by the Qualcomm Snapdragon 730G. Performance is more than acceptable for the price, but the Nord feels like it’s in another league.
Powering the OnePlus is Qualcomm’s speedy Snapdragon 765G paired with 8GB of RAM and 128GB of storage as standard. A 12/256GB configuration is available for anybody interested too.
As you can see, the Nord is already a little faster on paper, but the difference feels much more noticeable in day-to-day use thanks to that 90Hz refresh rate we mentioned above. It really takes things up a level.
OnePlus has done a good job with its software too. Although visually OxygenOS 10 is quite similar to the Pixel’s take on Android 10, the gesture navigation system feels much more refined on the OnePlus.
The app transitions and UI animations are faster as well, which helps create a feeling of speed throughout the entire operating system. There are more customization options in Settings as well.
Of course, stock Android does come with its own set of benefits. Google will continuously update the Pixel 4a for at least three years, for example, meaning buyers are guaranteed to receive Android 10, Android 11, and Android 12.
And because this is Google we’re talking about; those all-important software releases will roll out as soon as they’re made public.

OnePlus has made use of a 4,115mAh battery and Google opted for a 3,140mAh cell. Despite that difference, the two smartphones perform similarly and can last a full day without heavy usage.
Google has fantastically optimized the Pixel’s small battery but a larger cell would be welcome. OnePlus, on the other hand, could improve its results by squeezing more out of the existing capacity.
When it comes to charging, the OnePlus Nord, which also supports wireless charging, is the superior device thanks to the included 30W Warp Charge brick. The Pixel 4a ships with a slower 18W adapter in the box.

The camera department is one area where the Pixel 4a beats not only the OnePlus Nord but virtually every other midrange smartphone on the market. It does so with a single 12.2-megapixel sensor borrowed from the flagship Pixel 4.
The OnePlus Nord, in case you’re wondering, is fitted with a 48-megapixel primary camera, an 8-megapixel ultra-wide, a 5-megapixel depth sensor, and a basic 2-megapixel macro camera.
Both phones are capable of recording 4K video at 30fps and 1080p at either 30fps or 60fps. The Pixel 4a also supports 1080p at 120fps, but the Nord increases that to 240fps.
All of this translates into decent photos on the OnePlus Nord and superb shots on the Google Pixel 4a thanks to the latter’s processing software. During the day, the Pixel tends to reproduce colors quite accurately while the Nord leans towards a higher level of saturation and colder tones.

Both smartphones seem to handle lighting quite well, although the Pixel does pull ahead in some of the trickier situations. That is especially noticeable at night, where the Pixel and Nord pit their Night Sight and Nightscape software against each other.
The presence of these features alone is already impressive at this price point, but Night Sight is the superior implementation with resulting photos looking more natural. Nightscape tends to favor yellow tones and shots sometimes look too exaggerated.

Neither of these devices has a telephoto camera, but the Pixel produces better-looking digital zoom shots thanks to its software. The OnePlus does, however, have an ultra-wide-angle shooter.
It doesn’t produce the most amazing shots in the world in terms of color, but they’re certainly acceptable and it’s a nice added feature. The same can be said for the macro camera, although its usefulness is a bit more limited.