Alright, Huawei has been commissioned to manufacture the latest myTouch devices for T-Mobile, and just like last time with LG’s offering, they’re also supplying a QWERTY one to complement the all-touch option. However, instead of being some sort of modest or super spec’d smartphone, this version of the myTouch Q is more laid back with its entry-level capacity. Fortunately, its $49.99 on-contract price seems tempting enough to warrant a purchase over other comparable model, so let’s see how it performs.

If you took the Huawei-made T-Mobile myTouch and added a landscape sliding QWERTY keyboard, you essentially have yourself the myTouch Q. Above all, we totally take a liking to its solid build quality and sturdy construction, but it’s somewhat bulky (0.56” thick) and heavy (6.52 oz) by today’s standards.


You can compare the T-Mobile myTouch Q with many other phones using our Size Visualization Tool.

In terms of cameras, it packs along a front-facing 0.3-megapixel VGA camera and a rear 5-megapixel auto-focus snapper and LED flash – the latter of which can shoot videos in 720p. Removing the soft touch rear casing, its 1,500 mAh battery, SIM slot, and spring loaded microSD card slot are all accessible.

Camera key (right)
Bottom side
Volume key and microUSB port (left)
Power key and 3.5mm jack (top)
Back
Battery compartment
The sides of the T-Mobile myTouch Q
And of course, there’s the matter regarding its physical keyboard, which has a snappy response when opening/closing. With its oval sized buttons, they’re spaced evenly from one another and slightly domed to offer us enough distinction with our thumbs. Beyond that, we’re able to casually type at a moderate rate thanks to its adequate response. However, we would’ve liked to see an additional shift and “ALT” key placed on the right portion of the keyboard for added convenience.

Donning a 4” WVGA (480 x 800) LCD display, it’s manageable in making out most details, but fails in outdoor usage due to its extensive washed out appearance. Specifically, tilting the handset distorts the contrast level and color production, to make it nearly impossible to view in direct sunlight. 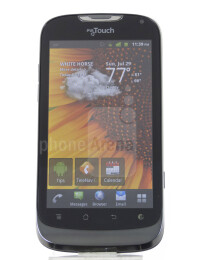 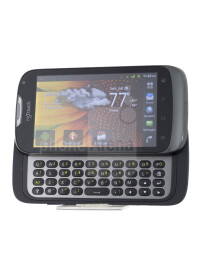 Stutter-gate: the number one thing I want to see Samsung fix in the Galaxy S22
Here's why Samsung dominated 2021 (Watch out, 2022!)
Samsung gets the stable Android 12 show on the road for the Galaxy Z Fold 3 and Z Flip 3 5G
Yet another report foreshadows 'delayed' Samsung Galaxy S22 series launch