Samsung Galaxy Z Flip 4 vs Galaxy S22: What to expect

The Samsung Galaxy Z Flip 3 created a ripple in the smartphone universe, much like a spinning binary black hole system. Well, astrophysics aside, this was the first foldable phone that challenged the status quo at one very important aspect - price.
Now, we're all very excited about the upcoming successor - the Galaxy Z Flip 4, and many of you might be asking yourselves - should I get this new foldable or opt for a conventional flagship, such as the Galaxy S22?
Today we're going to compare those two, and even though comparing a bar phone with a foldable might not make much sense at first, there's a valid reason to do so - after all, the Galaxy Z Flip 4 is expected to bring Samsung foldable game to another level, offering more power for less money (basically), alongside all the benefits of a foldable phone. So, without further ado, let's check out how these two stack against each other in various categories such as Display, Camera, Battery Life, Performance, etc.
Samsung Galaxy Z Flip 4 vs Galaxy S22 in a nutshell:
Table of Contents:

Apples and oranges... but are they?

It'd be easy to dismiss the design similarities between the Galaxy Z Flip 4 and the Galaxy S22 based on form factor alone. Let's not forget that those two come from Samsung, and they're more similar than you might think.
Of course, we don't know how the Galaxy Z Flip will look like but it's safe to say that any drastic changes in design from its predecessor are not likely to happen. With that being said, Samsung could turn things around and introduce a new camera bump or color scheme. What the Korean company won't do is change the materials - we're expecting the same glass/metal design as the predecessor, and that's one of the biggest similarities to the Galaxy S22.
Let's talk colors - according to the latest leaks, the Galaxy Z Flip 4 is expected to come in Gold, Gray, Light Blue, and Light Violet. The Galaxy S22 on the other hand is available in Cream, Violet, Sky Blue, and Graphite. So, there's overlap here with the Blue and Violet hues but we don't know how close these colors would be.
Moving on to the display part of the equation - we expect Samsung to once again use a 6.7-inch Full HD+ Dynamic AMOLED display with an LTPO variable refresh rate technology in the Galaxy Z Flip 4. Nothing wrong with that - whether or not it'd be the same exact panel from the previous version, we don't know. We're tempted to include a comparison between the Galaxy S22 and the Galaxy Z Flip 3 but let's hold our horses for now.
As for the Galaxy S22 - it's a known variable in this equation - the phone sports a 6.1-inch Super AMOLED display with 1080 x 2340 pixels resolution and variable refresh rate that goes all the way up to 120Hz. Here are some in-depth display tests.
Display Measurements:
View all
The CIE 1931 xy color gamut chart represents the set (area) of colors that a display can reproduce, with the sRGB colorspace (the highlighted triangle) serving as reference. The chart also provides a visual representation of a display's color accuracy. The small squares across the boundaries of the triangle are the reference points for the various colors, while the small dots are the actual measurements. Ideally, each dot should be positioned on top of its respective square. The 'x: CIE31' and 'y: CIE31' values in the table below the chart indicate the position of each measurement on the chart. 'Y' shows the luminance (in nits) of each measured color, while 'Target Y' is the desired luminance level for that color. Finally, 'ΔE 2000' is the Delta E value of the measured color. Delta E values of below 2 are ideal. 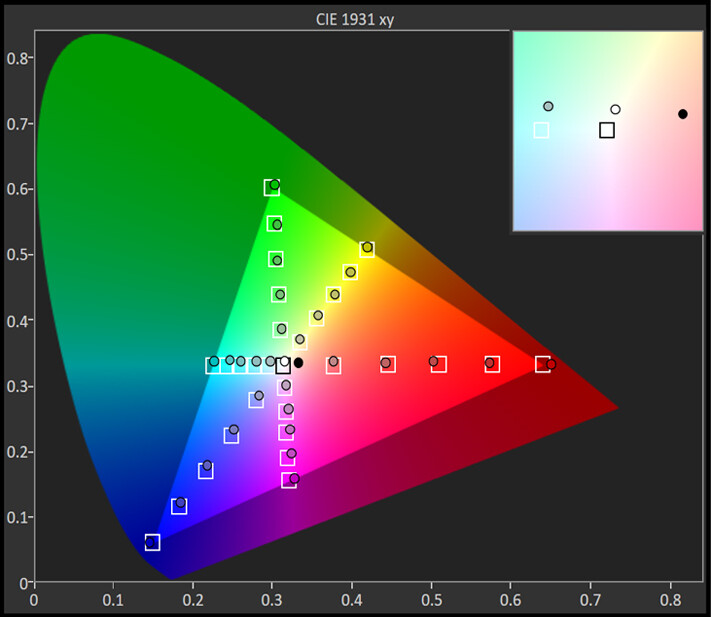 Top of the crops

On the hardware front we expect the Galaxy Z Flip 4 to come equipped with the yet-to-be-released Qualcomm Snapdragon 8+ Gen 1 (we tested a reference device, so you can check out the scores following the link) chipset - an overclocked and more efficient version of the regular 8 Gen 1.
The Galaxy S22 comes with a Snapdragon 8 Gen 1 in the States, so the performance difference between the two devices shouldn't be enormous (or tests show around a 10-15% bump compared to the previous model).
Both devices feature the same amount of RAM, and given that they run the same software (Android 12 with OneUI on top), the real-life performance should be very, very close. The benchmark results of the Galaxy S22 are below, and we will include a small reference table of the Snapdragon 8+ Gen 1 chipset.

Little is known about the Galaxy Z Flip 4's camera system. Chances are the phone will use the same dual 12MP wide/ultrawide setup from its predecessor, and that's not great news. Even though the Z Flip 3 can snap good photos, the lack of a dedicated telephoto lens makes the system less flexible.
The Galaxy S22, on the other hand, adds the aforementioned telephoto lens, alongside a main 1/1.56" sensor with a bigger pixel count - 50MP, with f/1.8. The ultrawide camera in the Galaxy Z Flip 4 could be the same 12MP f/2.2 we've seen through different models and generations (S21, S22, Z Flip 3).
For the moment, though, we should include some Galaxy S22 samples, just for reference (the ultrawide shots could be very close between the two but this is yet to be confirmed).

As close as it gets

It's still early days but according to the latest rumors, the Galaxy Z Flip 4 could come with a battery rated at 3,700mAh (that's actually two batteries working together - first cell has a rated capacity of 2,555mAh, and the second has a capacity of 1,040mAh).
The battery inside the Galaxy S22 has the same rated capacity, and given all the hardware and software similarities, we should expect more or less the same endurance from both devices. The S22 was criticized for it's less than perfect battery life, and the Galaxy Z Flip 4 will run an overclocked version of the Snapdragon 8 Gen 1 but all in all, both should be pretty close.

View all
Now, we shouldn't expect groundbreaking upgrades in the charging department (or upgrades at all, for that matter) when it comes to the Galaxy Z Flip 4. Samsung will probably play it safe and opt for the same 15W charging speed we saw in the Z Flip 3.
The Galaxy S22 on the other hand supports up to 25W fast charging, so it looks like it will have the edge in this category. We shouldn't jump to conclusions, though, as Samsung might brave up and upgrade the charging speed in its next foldable to match the other flagships in the Korean company's portfolio.

There's nothing wrong with the Galaxy S22, and if you want a compact flagship (that doesn't fold in half), you can go for the S22, no doubt about it, and save some money as a bonus. Stay tuned for our in-depth comparison - we will update this piece once we get the Galaxy Z Fold 4 in our hands.

Soon, you will be able to connect your Wear OS watch with your earbuds more easily
T-Mobile brings stable Android 12 goodies to its OnePlus Nord N200 5G
New entry-level iPad coming this fall reported to replace Lightning port with USB-C
Apple reported to launch new HomePod next year with a bunch of improvements
Apple's mixed reality headset will reportedly feature the M2 chip
Google and Apple might get investigated by the FTC for allegedly selling user data

Verizon and AT&T customers are suing T-Mobile for raising their prices (yes, really)
T-Mobile is keeping a popular old feature unchanged following customer outcry
Samsung has 50 million unsold smartphones in stock
Samsung's big Galaxy Z Fold 4 and Z Flip 4 storage upgrades are now set in stone
iPhone 14 Pro Max with a 5000 mAh battery would be the end to the Android vs Apple battery debate
No 120Hz display for iPhone 14: But Apple has a secret for smooth performance (that Android doesn’t)
FCC OKs Cingular\'s purchase of AT&T Wireless