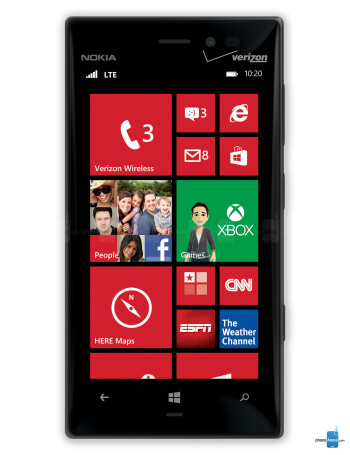 Great phone to have

I have just got the device as an upgrade for a 2nd line on my account through Verizon and the device is great. It is very responsive to the touch but the texting is sometimes a hassle when you have big hands. I sometimes have problem with texting people and accidently hitting the back button but I am learning to get used to it. The W8 interface is great and also a nice use for this phone because it actually works well for the design and don't cause any problems with the battery like my android to overheat. I like the camera for the device as well because it also is great, nice quality. The batter for this phone is my main selling point along with the UI speed and camera because I can go all day and a half of the next with one charge on battery saver mode.

Verizon may have been late to the game, but they still have an amazing Windows Phone

I was so excited when the 920 came out, but very disappointed to watch AT&T snag the rights to it for the United States. Then the 928 and 925 were released and I fell in love with the 928 absolutely my favorite phone I have owned. Before the Lumia I had a Galaxy Nexus which Verizon screwed up, and then before that the original Droid. So WP8 was a big step for me to leave android as I had watched it grow up from 2.0 to 4.2.2 but a step I have not regretted yet so far.

Build quality
9.0
The look of the phone to me is appealing, the weight of the phone is not an issue it actually makes holding lighter phones feel as if they're not as premium
Reception
10.0
Through the roof good quality
Call quality
10.0
Noise cancellation and good mics
Internet
9.0
I like IE
Multimedia
9.0
I like how MS went through Xbox with their multimedia... just need some more developers to like WP
Camera
10.0
Beautiful pictures day or night
UI speed
9.0
Its astonishing how much 'last gen' CPU and GPU can do on WP versus Android 4.2.2
Everyday usage
9.0
Text input
6.0
Keyboard could use some improvements
Display
8.0
Beautiful display ... but can be difficult still to read in the sun even with the sunlight reading mode on
Battery
10.0
Average use for the past month of owning this phone has been 10 hours... video playback was 7 hrs and 45 mins if that helps

11 out of 13 people found this review helpful.

This is the best phone I have ever owned.

When I bought this phone last year I thought it was a very well built phone. I loved how great it runs and how easy it is to navigate the phone. Now I came from having nothing but galaxy phones. So I was spoiled with the apps. I wanted to make a change due to how I was being treated with straight talk. I went with verizon after being away from them. Well I am not dissappointed with this phone at all. The screen is so clear and the camera is just mind blowing clear. Now the only down fall is the apps. That's not so much the phones fault but more due to microsoft and not being as developed and deep like google and android are. I have to add since I got the Denim update this phone is freaking awesome. Move over Siri, Cortana is taking over! Cortana can remind you about appointments and if your close to say the grocery store she will remind you to pick up milk. Like I said the only downfall is the apps. There are some good ones but not very many have come over to windows and I feel like if they would let them have the chance to it would make these phones unstoppable.

Build quality
10.0
Its just so clean and simple.
Reception
10.0
Every other phone I have had the reception was horrible.
Call quality
10.0
the best. I haven't dropped any calls and I hear everything.
Internet
10.0
I rated this high because it is was faster then the last phones I have had. I hardly use the net unless I am looking up random stuff but its so fast.
Multimedia
10.0
I like how easy it is to make videos or take pictures. There just so clear and crisp.
Camera
10.0
I love the camera. It's better then my regular camera.
UI speed
10.0
Everyday usage
10.0
I can use my phone a lot and still not need to plug in for quite awhile. Besides its best to charge down instead of floating the battery.
Text input
10.0
When I had android my keyboard always locked up. It has never happened with this phone and its so much smoother.
Display
10.0
I chose this rating because I watch a lot of HD videos and play games. Its just so clear and crisp.
Battery
10.0
I rated this high because it stays fairly charged however if it goes bad you have to send your phone in to have it replaced.

I've owned and used various iPhones and Android devices. The Nokia Lumia 928 is without question the best one I've ever owned. From usability, size, speed and just fun. You heard right, the phone is just fun to be on. The device is made so much better with Windows Phone 8.1 features. Everything from the information hub to cortana and most importantly (to me) the Word Flow keyboard (Microsofts much improved version of Androids beloved Swype), all the features I didn't realize I missed from other phones.

Groups have been an amazing way for me to keep in touch with friends and family. Grouping family into a single Family Room has been extremely convenient. I find myself using groups much more than I ever thought I would. The wife adds items to the group calendar so I know when the kids have games, doctors appointments, and I add items to our grocery list we have in our group notes as I find we need stuff. It's an extremely convenient feature that I don't think many know about or realize how great it really can be.

With Windows Phone 8.1 OS, the Nokia Lumia 928 makes my list of all-time phones.

The Lumia 928 IS above average in specs display and for everything but average cost it has 1.5Mhz Dual core and 1 GB RAM it Very good for person who need an above average mid-range device and you will really enjoy it my sister had for less than 2 months and it's beats my Galaxy SII plus much beats it because the 720 super amoled display HD and 326ppi vs the SII plus which is 217 ppi

Build quality
10.0
It JUST Great because of the weight and Looking at It and touch it it's really great
Reception
10.0
Call quality
10.0
I don't need to tell ya you know it Nokia's long history for Great call quality
Internet
9.0
Multimedia
9.0
Camera
10.0
With Xenon flash and 8.7 MP you got a great camera
UI speed
9.0
Everyday usage
10.0
Text input
9.0
Display
10.0
You Got a Super AMOLED Display you got a fantastic Display
Battery
9.0
IT just Very Good

I went from the HTC 8X to the Nokia Lumia 928 and I haven't looked back. This phone is everything that the 8X wasn't. It has a fantastic camera, vivid screen, incredible battery life, and fantastic call quality. It's 4G and wifi make it easy to connect anywhere you are and speed through tasks. I have never used and loved a phone as much as this one. The only issue I have with it is that the chrome "Carl Zeiss" camera piece gets finger prints very easy. But thats fixed with a easy wiping off. Haha. Also I saw that one person said no expandable memory was a con, but it comes with 24GB of usable space and I feel like that is very, very reasonable for a phone that is free right now on Verizon. And you may see that I have only had it for under 3 months but if you get one thats all the time you'll need too.

Build quality
10.0
Feels very sturdy. Nice weight to let you know it isn't cheap.
Reception
10.0
Have never dropped a call.
Call quality
10.0
Everyone sounds crystal and they say I sound clear too. The noise canceling mics might have something to do with that.
Internet
10.0
Great. Never had any issues.
Multimedia
10.0
Plays music and videos fast and easy. Especially love Nokia Music. It's like pandora only better.
Camera
10.0
Best camera I have ever used. Compared it to my buddies Lumia 920 and the Xenon flash really does make a difference. Low light shooting is incredible.
UI speed
10.0
Fast, fluid, and smooth.
Everyday usage
10.0
Very easy to pick up and use.
Text input
10.0
Great keyboard. Nicely spaced.
Display
9.0
Very dark blacks and vivid colors. Except sometimes the auto adjust makes my red tiles look pink. Just turn that off and it's no issue though.
Battery
10.0
INCREDIBLE. Right now I am looking at my app Battery Sense and it is showing 84% battery after 12 hours and 6 minutes.

Best Phone Verizon Has Ever Carried

No single phone will ever be THE phone that will meet everyone's needs. But this is the best phone that Verizon has ever carried. Ever. You don't have the security holes that Android is infamous for. You have features that iPhone can't touch (Camera). Optical image stabilization makes for great low-light photos. The UI is slick and doesn't get bogged down like Android. You don't need to manage the apps in the background, like Android - the OS does it for you. The phone is just awesome.

Face it...iPhone, Android and Windows all have great phones. There is no right answer

Its like arguing about cars these days. Each have great phones and each have pro's and con's. I've used them all and continue to prefer windows due to my needs. I like the interface, the movement and love the integration with xbox, and windows 8 PC's. I know everyone talks about the camera but it really is amazing. My wife has the iPhone 5 and I take the same picture with both and there is not comparison. If you are a windows person you should have no second thoughts about this phone.

7 out of 9 people found this review helpful.