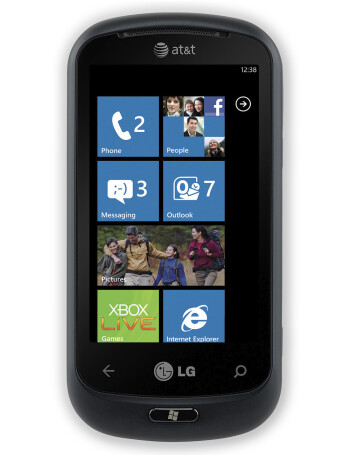 So i got this new phone, i opened the box and i was like "WOW." Thought it was soo cool cause it was windows. But after i messed around it for a couple of days and the worst hit me.

1) Cant recieve or send pictures?
2) The shutter button can not be turned off, even if the phone was on silent (That bugged me) And you cant zoom in while recording a video.
3) Can't add your own ringtones. So your stuck with the ones they give you.
4) the battery cover is soo thin and the color on the cover scratched off on to the case i had for it.
5) No memo area? No note taking? wooow, even my windows 7 laptop can take notes.
6) its a fat phone with not much use, i guess.

The good things were that i liked the keyboard and the messaging. The key board was smooth and spaced out and was easy to use. Atleast it has a calculator and a calendar.

I was dissapointed after trying out the phone and it didnt have much.

i thought the phone would be great wow windows 7 phone kool BUT then the fun hit after day 34 of having the phone. my friend sent me all sorts of kool audio clips and ring tones HOWever you cant save them to use as your own that isnt a featrure then i caught a kool video while in new orleans BUT once again cant send video through text my old phone did both and more like being able to edit photos WITHOUT having to go find and down load an app.

Bought the phone because it had nice big text in the phone book, etc. Love the icons on the front screen. But then reality hit when my kids sent me my first text message. The font is incredibly small. Went back to the AT&T store where I found out that AT&T specked out all of their smart phones this way. They actually took away a standard feature of being able to blow up the text so you can read it. I called LG and they confirmed that this was done at AT&T's request and that they can't send out the fix until AT&T requests it. My wife contacted AT&T about it and they told her that they can't accomodate everyone and to return the phone as "buyer's remorse". My only remorse is that I'm stuck with AT&T on a family plan and can't go to another carrier who is more responsive to customer needs.

Still Waiting for an Update

-Hardware-
The phone is well-built. Feels like it could be dropped without much damage, and the slide doesn't feel cheap or breakable. However, the shift and function keys are awkwardly placed. As someone who regularly capitalizes/punctuates their sentences, this has been frustrating.

-Software-
Firstly, credit where it's due: the Facebook and Gmail/Google Calendar integration is fantastic, and the menu system isn't terrible.

However, that's where the software's glimmer ends. No copy-paste, little to no configurability in any of the applications, of which there are a pittance. (12 "personal massage" applications, and nothing remotely resembling a decent IM client.)

Microsoft has locked you into the IE Mobile web browser (& Bing), which, although serviceable, lacks flash support and frequently stumbles over rendering. The app store itself is a mess, making no differentiation between the artists in the Zune music store and applications, making every search a scavenger hunt for a potentially not-crap application among 50 entries, 47 of which are crappy bands and albums that share a couple letters with your query.

The worst, however, is Microsoft's complete silence regarding updates for WP7. If their months of mum regarding such are any indication, Quantum users have a looong while to wait before WP7 gets patched to the basic functionality of iOS, Android, RIM, or any other mobile OS.

I'm getting something else.

I forgot to mention, that even though the ring-tones are boring, with bluetooth I'm sure I can share some ring-tones with friends and if all is lost, I can send images to my email and edit them in Photoshop. And if you buy a screen protector for it, don't buy the cheap ones at Wal-Mart, they slide off after it gets warm, from say... in someones pocket. ;)

Got this phone 3 weeks ago and so far its proven great. 3 cons; for starters, I can't figure out how to share my videos. I'm a military spouse so I would love to send a video or two of me and my kids to my husband and family, but, don't see how. Second con is the basic ring-tones and alarm sounds are boring and some aren't all that loud. Thirdly is I can't figure out how to edit (change colors, contrast, crop or add text/graphics) the images once they've been taken or saved into the gallery. Everything else works great.

Build quality
10.0
Reception
9.0
not all of lower Alabama gets reception
Call quality
9.0
some days my calls are cut off (I can't hear anything but the person I'm talking to can).
Internet
9.0
sometimes it freezes
Multimedia
10.0
Camera
10.0
Can't send/share videos
UI speed
10.0
Everyday usage
10.0
Text input
10.0
Display
10.0
Battery
8.0
Its obvious in all internet phones. IPhone is worse.

Many first generation unlocked Windows Phones can be bought for dirt cheap via Amazon
LG Quantum no longer available from AT&T
Mango coming to the HTC HD7S, Surround, LG Quantum and Samsung Focus
LG Quantum and Samsung Focus on AT&T to get "NoDo" upgrade within 10 days
AT&T reduces the pricing of its popular smartphones in time for spring
AT&T is selling the LG Quantum for $0.01 & Sony Ericsson Xperia X10 for $19.99
LG doesn't disclose figures, but says its WP7 launch was disappointing
NewEgg is selling certain AT&T Windows Phone 7 devices for free