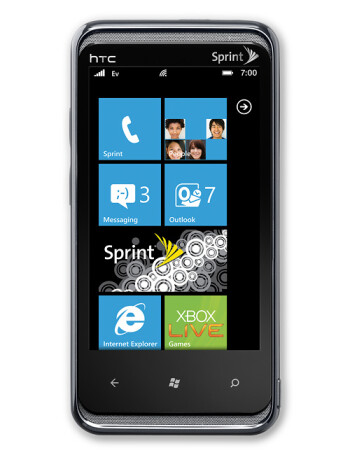 Some small tweeks would make it a great phone.

I've had this phone going on six months now and I have to admit I love it. Some small things would make it nicer but as a young OS it's comming along much faster then others. The phone itself very nice. I love the metro ui but this is a love it or hate it thing. The camera isn't bad for a phone but better optics would make it great. I've had very few problems with the recpetion and mostly in common places where my friend's evo has the same problems so I really can't complain to much about it. I think it's more of a Sprint problem. I like that I have a real keyboard and not just an on screen one. The screen tilt is very nice when sending emails. The screen isn't bad but it's not as nice as Samsung screens are.

I been using HTC Arrive for over a year now and found it to be much superior OS than Iphone and Android. I believe microsoft got it right this time with its Metro UI. it doesn't feel cluttery and simple to use.

HTC Arrive is an amazing phone on the Sprint line up.

This phone is highly underrated. The HTC Arrive is a great device and packs a punch all into one. You get a physical keyboard and probably one of the best ones out on the market. You get a decently sized screen at 3.6" (Hey it's .1 bigger than an iPhone.) You get a pretty good camera, and not to mention crazy battery life. I was very shocked at how well this phone performed and how sweet the UI is. I have an iPhone, but also still have my Arrive. I play with both daily and each day I find myself loving the Arrive more. I'm sold on WP7 and look forward to seeing more from the platform in the future.

Build quality
10.0
Build is amazing. Solid. Will say it's pretty heavy and thick, but that's a given with the keyboard.
Reception
9.0
Call quality
10.0
Internet
10.0
Multimedia
10.0
Camera
8.0
Camera is 5mp and the quality isn't too bad. Definitely not better than say an iPhone 4S, but still decent. Also love the camera shutter button.
UI speed
10.0
Flawless and fluid!
Everyday usage
10.0
Text input
10.0
The physical keyboard is the best I've ever used. What's even better is the on screen keyboard is amazing too! I'd personally say it's better than the iPhone's onscreen keyboard.
Display
8.0
Display is 3.6 and a little small. Resolution is pretty good, but definitely could have been better with a Super amoLED display.
Battery
10.0
I was VERY impressed with the battery life on this device. I could EASILY get through the day after using it pretty heavily. Listening to music, texting, calling, playing some games, and browsing the web.

I upgraded to this phone from a Palm Pre that I had had since its release in June 2009. I decided to jump onto another promising new operating system in Windows Phone 7 after I had had a good experience being an early adopter of the Pre. After getting used to the phone I am still very pleased that I switched, however I recognize that WP7 is still very raw and will need to be hugely improved with the upcoming Mango update. As has been stated in every WP review I have read, the foundation for a great mobile OS has been laid by the initial innovation of WP but will need lots of perfecting to compete with the other, more mature platforms. I am enjoying my Arrive and it still does not have a scratch on it after a month of fairly heavy, at times, less than careful use.

As Good as I had Hoped

I waited a long time for this phone and it met my expectaions. Great operating system obviously if you need to root your phone or make major customizations to your phone it is probably not for you. If you are looking for a polished Smartphone consider The Arrive. If you are looking for a Windows Phone with a physical keyboard this is the best of the batch. Music experience is great, Zune PC software is excellent for organizing your collections and syncing your phone. The OS is still young and will have significant improvements and add even more functionality.

One more thing, dont let service reps talk you out of this phone, if what you see in the store intrigues you I say go for it. I have had quite a few try to shoo me over to the Android section when I have played with them at the store. If they say it is slow and buggy, they are talking about WM6.5 and should lose all credibility.

Build quality
10.0
Reception
8.0
Good for a Sprint phone, better than the others I have had in the past at the same locations. Mostly a Sprint thing.
Call quality
9.0
Good call quality but I have bumped the end call button with my ear a couple times.
Internet
7.0
Browser isnt great, but it is good.
Multimedia
10.0
Zune player is unbelievable! I have always loved it on my coumputers and on my devices. A big reason I bought the phone.
Camera
7.0
HTC is pretty well known to put ify cameras in there phones. It takes quite a few blurry photos in dim light. Then again I have taken some really awesome pictures too! Overall it is just good. Quick camera lauch is amazing though!
UI speed
10.0
Fast and gorgeous.
Everyday usage
9.0
Live tiles update sports scores, events, notifications etc for quick viewing without launching apps. Toast notification alert you immediately with previes of texts or facebook notifications without interupting what you are doing.
Text input
8.0
Does not correct words without spaces or words with numbers in the middle, and I wish the hardware keyboard had a tab button. Other than that it is great.
Display
9.0
Thought I would really want a large screen, but I am suprisingly satisfied with the 3.6" display
Battery
7.0
Cant make it through the day on heavy usage, but it is reasonable.

Much to be desired

Cannot add ring tones, system is fairly well locked down. Manipulating title screen for clock display and battery life is difficult(looking for app). Would prefer phone with wm6.5. Tethering for business is not offered and the phone does not have a hotspot capability.

Overall this is a great device.
Build quality is top notch, even with the goofy hinge for the slide out and tilt.
Reception is on par (good) as other HTC devices.
Internet is not bad, but it's not as good as Android (browser is based on a mix of IE 7 and 8, not webkit).
Multimedia is fairly good experience overall. You must sync to Zune to load music and videos or buy them from Market (and no customer ringtones only the ones on phone and in market)... I would like the ability to side load music...
Camera is NOT on par with my two previous HTC phones (EVO and Hero). Both the Arrive and Hero have a 5 mp camera but I guess the default camera app for Windows Phone is not as good as the custom camera app HTC does for Android. The pictures aren't bad per se, just not the quality that I'm used to.
I can honestly say I think it's the most beautiful UI I've seen on a phone. It's clean, it's fast and really handles everything well.
Both on screen and hardware keyboard are phenomenal.
The SLCD is super sexy. Crisp and clear! One of the best screens!
Battery.... Good so far. I haven't really gotten into "regular" usage. Still with the heavy usage I've done, it's better than the EVO and Hero.
Sky Drive is awesome....... 25 gb for storage, heck yes!

Build quality
10.0
Reception
10.0
Call quality
10.0
Internet
8.0
I think webkit is better and more and more sites are catering to iPhone and Android which use webkit... IE 7 looks dated.
Multimedia
9.0
Would be a 10 if sideloading music(not using Zune was an option) but extra points for Sky Drive.
Camera
8.0
Not as good of a camera as other HTC devices.
UI speed
10.0
Everyday usage
9.0
Unfortunately, I use my phones camera A LOT!!! If a camera isn't a top priority, than easily could be a 10 for everyday use.
Text input
10.0
Display
10.0
Battery
10.0

MUCH BETTER THEN I EXPECTED..

I'm a Heavy User when it comes to wireless gadgets, specially Smartphones, and now that I have this HTC Arrive Smartphone, am getting more and more surprised.. In many ways, it much better then expected and after having a couple of iPhones and a couple of Android Phones, I still gave it a shot and so far, it has been VERY Worth it..