Samsung Galaxy S22 Plus vs Galaxy S21 Plus: Upgrade or not?

Samsung
Peter Kostadinov
4
We may earn a commission if you make a purchase from the links on this page.
The Galaxy S22 Plus takes the reins from the Galaxy S21 Plus, and arrives with the promise of improved camera image quality, updated and slightly more posh new design, better performance, and more. But what if you bought a Galaxy S21 Plus last year? Should you upgrade from the “old” Galaxy S21 Plus to the upcoming one? Has Samsung finally cracked the code behind the large affordable flagship?
To put things simply, the Galaxy S22 Plus touches upon some essential pillars of the smartphone experience. The changes in the image quality are mostly for the good, with some exceptions. Performance and battery life are also very much improved, as one would expect when jumping from one generation to the next one.
And in late 2022, with the Galaxy S22 Plus almost nearing the end of its life cycle, it's time to turn our heads to the next exciting generation of Galaxy flagships, helmed by the Galaxy S23 Ultra, but we also expect the Galaxy S23 Plus to welcome big improvements over its precursor. For a full preliminary comparison, check out our Galaxy S23 Plus vs Galaxy S22 Plus preview.
Jump to section:
8.0

Stack the Galaxy S23 Ultra preorder reservation bonus with Samsung's preorder gifts and trade-in offers, and you may be able to get a 512GB model for just $330!
Gift
Reserve at Samsung

Just a few days to discount your Galaxy S23+ preorder!

The Samsung Galaxy S23+ preorder reservations will only be open until Samsung's Unpacked event when you can stack the $50-$100 discount to all new preorder bonuses like free 512GB storage upgrade.
Gift
Reserve at Samsung

Final call to reserve a Samsung Galaxy S23 with a bonus!

There isn't much time left to hit the Galaxy S23 reserve button here and secure an essentially free with a trade 256GB model of the fastest compact Android phone with a Samsung-exclusive Snapdragon 8 Gen 2 processor!
Gift
Reserve at Samsung

Samsung Galaxy S22 Plus vs Galaxy S21 Plus design and colors

The Gorilla Glass Victus and Armor Aluminum sandwich that is the Galaxy S22 Plus definitely evokes callbacks to the iPhone 12/13 design language with its flat front and backplates and nearly flat side frame. The Galaxy S22 Plus feels extremely sturdy and solid, but admittedly, it is nicer to look at than use. The S22 Ultra is more ergonomic and comfortable to use than the Galaxy S22 Plus due to the design of the latter. Certainly, Samsung's inspiration from Apple's design language definitely looks cool, but doesn't add anything positive to the ergonomics of the device.
At the same time, the Galaxy S21 Plus definitely has the core Galaxy DNA etched deep into its exterior design. Unmistakably a high-end Samsung phone, the Galaxy S21 Plus fuses glass and metal in a premium blend that looks so posh. The matte frosted glass back feels good in the hands and holds no fingerprints, but it's certainly slippery. Yet, the Galaxy S20 Plus, yes the even older model, somehow feels better in the hand as its curvier exterior carves less into the palm.
When it comes to color combinations, the S22 Plus definitely has the upper hand with its more subdued and classy color selection. The Galaxy S22 Plus is available in White, Phantom Black, Pink Gold, Green, and a bunch of online-exclusive colors. You can find out more about the Galaxy S22 Plus colors here.

Samsung Galaxy S22 Plus vs Galaxy S21 Plus display

We have a slightly smaller, 6.6-inch LTPO Dynamic AMOLED display on the Galaxy S22 Plus, a smidgen smaller than the 6.7-inch one found on the Galaxy S21 Plus. Both displays are completely flat and offer superb viewing angles. Gone are the days of curved displays, at least for Samsung, as these quickly fell out of fashion and everyone seems set to switch to the mostly flat, right-angle design that was reinvigorated by Apple with the iPhone 12-series and newer.
In terms of display refresh, both the Galaxy S21 Plus and the Galaxy S22 Plus dynamically switch between 48 and 120Hz refresh rate depending on the on-screen content, though we were initially led to believe that the display could go all the way down to 10Hz. Subsequently, it became clear that while the GPU feeds 10Hz refresh data to the display, the actual panel still refreshes at 48Hz at the minimum.
Display measurements and quality
View all
The CIE 1931 xy color gamut chart represents the set (area) of colors that a display can reproduce, with the sRGB colorspace (the highlighted triangle) serving as reference. The chart also provides a visual representation of a display's color accuracy. The small squares across the boundaries of the triangle are the reference points for the various colors, while the small dots are the actual measurements. Ideally, each dot should be positioned on top of its respective square. The 'x: CIE31' and 'y: CIE31' values in the table below the chart indicate the position of each measurement on the chart. 'Y' shows the luminance (in nits) of each measured color, while 'Target Y' is the desired luminance level for that color. Finally, 'ΔE 2000' is the Delta E value of the measured color. Delta E values of below 2 are ideal. 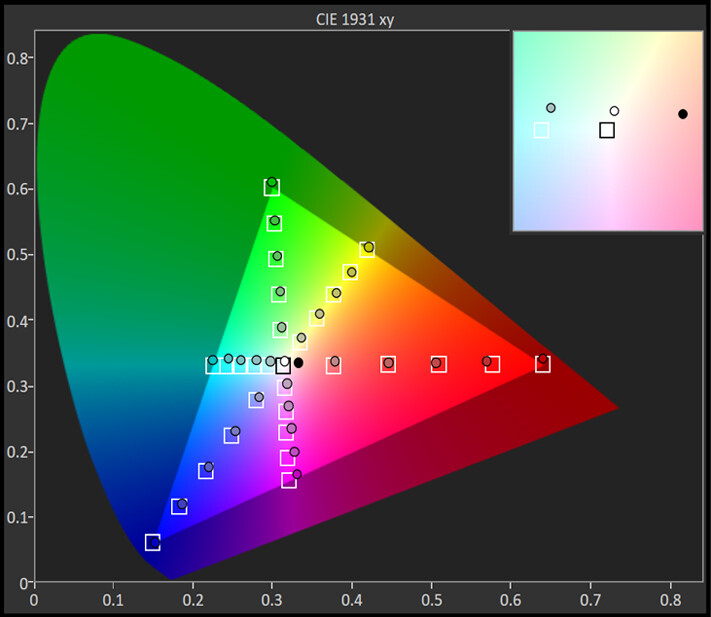 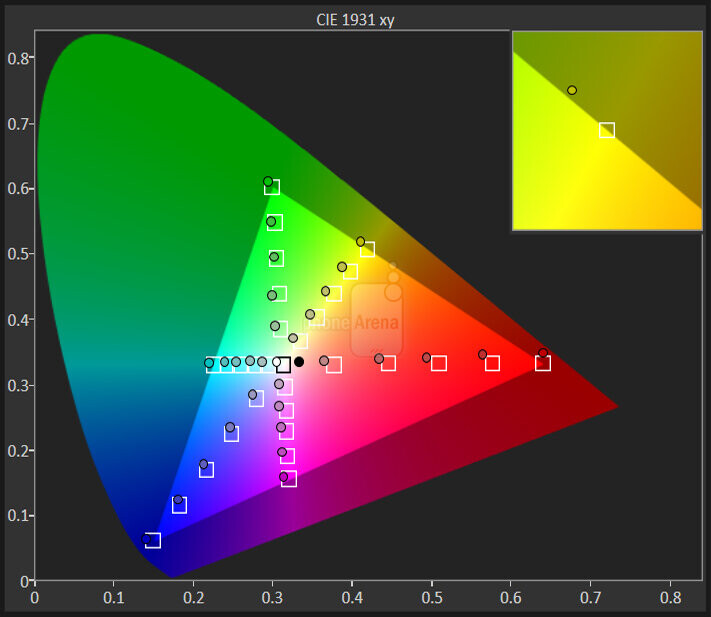 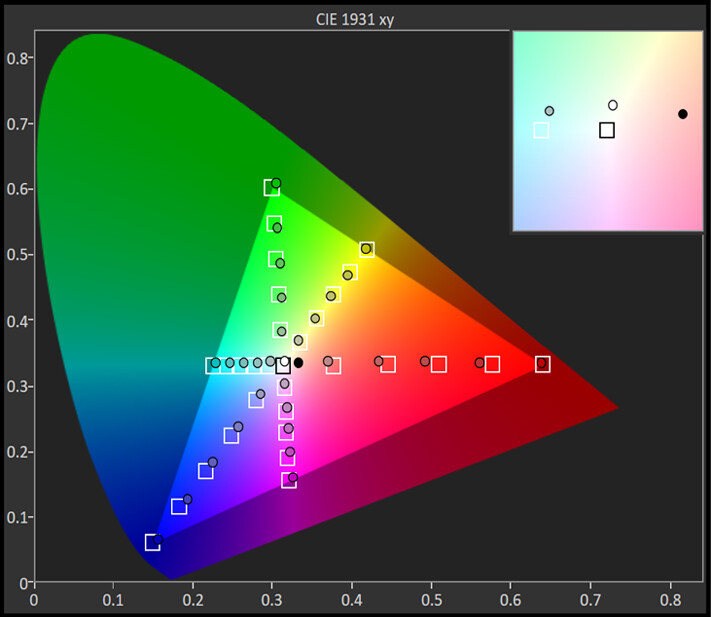 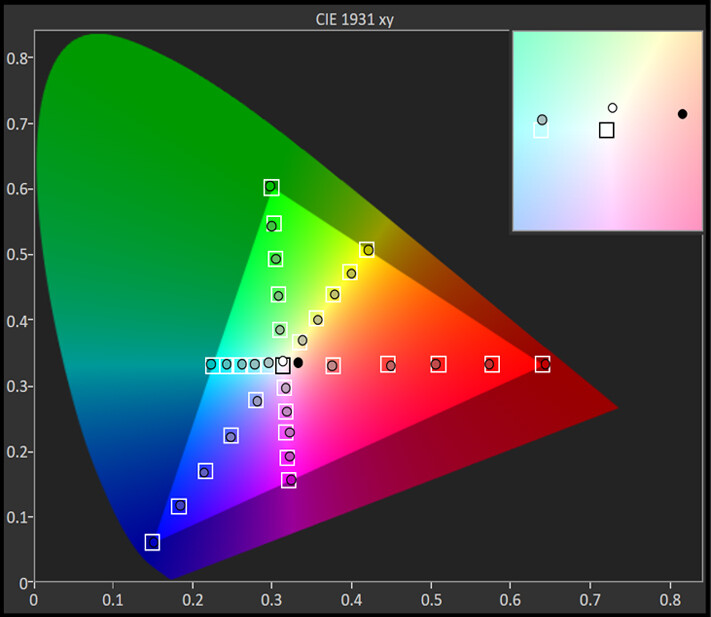 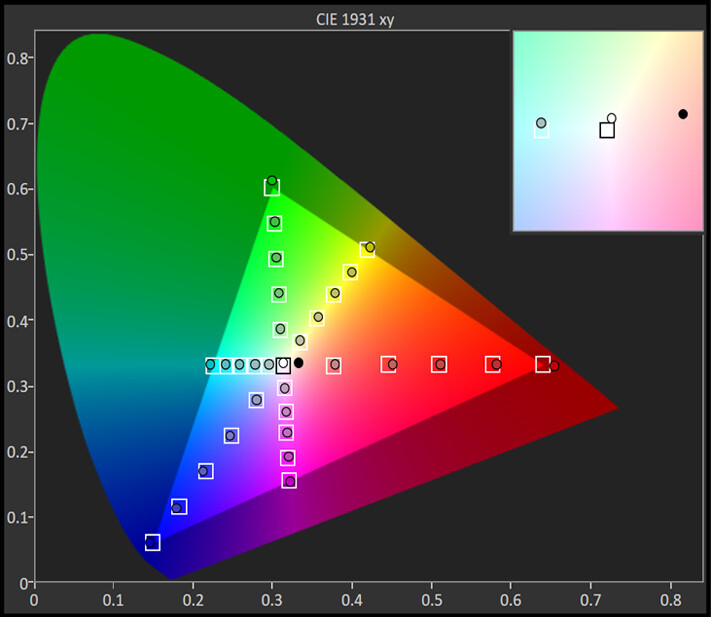 View all
Aside from that, the screens of both devices offer exceptional quality: superb vivid colors, awesome contrast and sharpness despite the FHD+ resolution that's common on both.

Samsung Galaxy S22 Plus vs Galaxy S21 Plus camera

The Galaxy S22 Plus comes with an improved camera setup from a purely hardware perspective, but the differences in image quality aren't that stark... with a few notable exceptions.
From the get-go, the Galaxy S22 Plus seems to have a slightly better dynamic range resolve and not burn the highlights that much compared to its predecessor, but there's the issue of noticeable over-sharpening. The S22 Plus is plagued by this issue resulting in images that appear more detailed but terribly over-sharpened, which isn't ideal to say the least.
This over-sharpening is mostly visible when shooting near subjects and portraits in particular. It might not bother you, but in a direct comparison, the Galaxy S21 Plus will almost always output a slightly more natural-looking image, with less excessive sharpening.

Galaxy S22 Plus vs Galaxy S21 Plus Portrait comparison

Galaxy S22 Plus vs Galaxy S21 Plus specs and performance

Despite the usual hubbub that the Exynos chipset might get featured in more regions than usual, the tradition of using Qualcomm chips globally has been kept alive and the Snapdragon 8 Gen 1 chipset has remained a staple of most Galaxies outside of Europe.
In the latter, the Galaxy S22 Plus comes with the Exynos 2200 on deck, and that's what we have on hand for our synthetic benchmark tests. There's a marginal difference in performance in favor of the new chip, as is logical, though it's not as big as we'd hoped it would be.
The Qualcomm Snapdragon 888 chipset powers the Galaxy S21 models in the US, while the Exynos 2100 is used in the rest of the world. Both chipsets are based on the latest 5-nanometer process, which enables noticeable battery life improvements, and offer 5G network connectivity.
AnTuTu is a multi-layered, comprehensive mobile benchmark app that assesses various aspects of a device, including CPU, GPU, RAM, I/O, and UX performance. A higher score means an overall faster device.
If the T-Rex HD component of GFXBench is demanding, then the Manhattan test is downright gruelling. It's a GPU-centric test that simulates an extremely graphically intensive gaming environment that is meant to push the GPU to the max. that simulates a graphically-intensive gaming environment on the screen. The results achieved are measured in frames per second, with more frames being better.
View all
The Galaxy S22 Plus comes with 8GB of RAM and starts with 128GB of native storage. You can have it with 256GB of native storage as well, though the lack of a microSD card slot impedes the possibility for further hardware storage expansion.
As standard, the S21 Plus comes with 8GB of RAM, whereas you will find 12 or 16GB of RAM inside the Galaxy S21 Ultra. Samsung is betting on 128GB of storage as standard with the option of 256GB variants, as well as an extra 512GB model for the S21 Ultra.

While the older device boasts a sizeable 5,000mAh battery, the Galaxy S22 Plus comes with a 4,500mAh juicer at the rear. Has this severely worsened the battery life of the new phone? Surely the new processors on board will bring additional power saving gains, but it's always sad to see batteries shrinking in size.
So far, we expect Samsung to adorn the Galaxy S22 series with 45W charging that wouldn't put them on par with the fastest-charging phones out there, but would definitely shorten those pesky charging times. In comparison, the Galaxy S21 Plus only charges up to 25W, and with the stock 25W Samsung charger, it takes it roughly 70 minutes to go from 0 to 100%. Hopefully, the Galaxy S22 Plus will slash those times by half, at least.
View all

Samsung Galaxy S22 Plus vs Galaxy S21 Plus Conclusion

Facebook drains users' cellphone batteries intentionally says ex-employee
Android and iOS users need to uninstall these 203 apps before their bank accounts are drained
T-Mobile may have to stop calling its Home Internet network 'fast' and 'reliable' soon
Google Pixel 6 and 7 owners suddenly getting the January 2023 Play system update, but with a caveat
Galaxy S23 Ultra: One for the Astrophotography people! Everyone else, take another look at S22 Ultra
Samsung officially confirms main Galaxy S23 series pre-order deal (at least in one country)