When it comes to rivalries in the tech industry, few are the clashes more fierce than the one between Apple and Samsung for dominance on the smartphone arena.

Over the past few years, Samsung has stepped up its design efforts and now makes beautiful glass and metal devices that catch the eye. The latest is the Samsung Galaxy Note 8: a big phone paired with an S Pen stylus, which is a unique feature that no other phone on the market can deliver.

But the Note 8 may have just met its match. Apple just launched its new iPhone 8 Plus, introducing an evolutionary design with a glass back, a hugely improved processor and new iOS 11 chops.

Both phones are also powerful cameraphones: the Note 8 is Samsung’s first phone with a telephoto lens intended for zooming and portraits, while the iPhone 8 Plus further improves the Portrait Mode Apple introduced last year with the 7 Plus.

So which one is better and which one should you get? Let’s weigh all the pros and cons...

Both are big phones, but the bezel-less Note 8 makes better use of that space with its Infinity Display.

Samsung has done a great job going from cheap and uninspiring plastic phones a few years ago to its industry-leading sleek glass-and-metal designs, while Apple… well, let’s just say that the iPhone 8 Plus feels like the fourth generation of the same design the company introduced with iPhone 6 Plus. It’s not changed much. And this feels like one area where Samsung has taken the lead: it has the futuristic bezel-less design and it has the sleek look, while the iPhone 8 Plus feels like... more of the same. But it has evolved: the new glass back on the iPhone 8 Plus does make the phone feel better in the hand, and the silver and gold colors mask fingerprints very well, so the phone looks clean even after it has been used for a while. Notably, the space gray iPhone, just like all versions of the Note 8, gets messy with finger smudges very easily.

There are two other important things about the glass design on both: one, it can scratch easily, and two, it will likely break if you drop it. Cases are certainly recommended with both the Plus and the Note 8, but if you dare use the phones without one, you would notice that unlike other metal phones (cough, matte iPhone 7), these two are not that slippery, which is good.

The other thing to know is that both these phones are big, really big. Neither phone fits comfortably in my jeans pocket. The Note 8 is narrower, but longer, while the iPhone 8 Plus is very wide. You have to use both of your hands most of the times when using either of these phones.

Here is the actual physical size of both, and you can find a size comparison below:

Considering they are so big, it is really annoying that Samsung continues to place the fingerprint scanner way out of reach and near the camera on the Note 8. It’s a big inconvenience, and the front-placed iPhone 8 Plus finger scanner feels much more natural.

Both phones are water-sealed (hooray!): the iPhone carries an IP67 rating, while the Note 8 has a higher, IP68 certification. The first ‘6’ in both ratings signifies that the phones are equally well protected from dust ingress, while the second figure differs: the IP67 iPhone can withstand immersion in up to 3-feet deep water, while the IP68 Note 8 can withstand up to 5-feet water depth, and both are guaranteed to withstand water damage within 30 minutes.

See the full Apple iPhone 8 Plus vs Samsung Galaxy Note8 size comparison or compare them to other phones using our Size Comparison tool.

Two of the best screens out there: lively colors, excellent brightness.

Let’s get this out of the way: these are the two best looking screens on the market right now.

The iPhone 8 Plus has a 5.5-inch LCD, while the Note 8 features a 6.3-inch AMOLED display. Both default to 1080p resolution, but you can set a higher, Quad HD resolution on the Note 8.

The big difference is in the sheer size and form of the screen. Samsung calls its screen “Infinity Display” because it has almost no bezels, and this shows in our measurements: the iPhone has a 67.5% screen-to-body ratio, while the Note 8 rocks 83%. This makes a difference: the Note 8 feels more immersive, more impressive, and it fits more content. Admittedly, the bottom part is still occupied by virtual buttons, so you don’t always have the full screen unobstructed.

Then we have color, the bread and butter of all displays. The iPhone 8 Plus supports DCI-P3, a color standard that simply means that the phone can show more colors. It’s especially noticeable when you compare this to a traditional screen, where colors look duller, less vibrant. The Note 8 also supports eye-popping colors by default, and you can select different color rendition modes for the Note in settings.

Then, the iPhone 8 Plus comes with one neat innovation: True Tone technology. True Tone will adapt the display’s white balance to room light, usually making your phone look slightly warmer indoors, for a more natural look. We like this small convenience.

The Note 8, on the other hand, gets slightly brighter outdoors, but both have among the highest screen brightness ever and low reflectivity and are easy to use outdoors. Finally, if you are a night owl, you should know that the Note 8 is more comfortable to use at night time with its lower minimum brightness that will induce less eye strain. 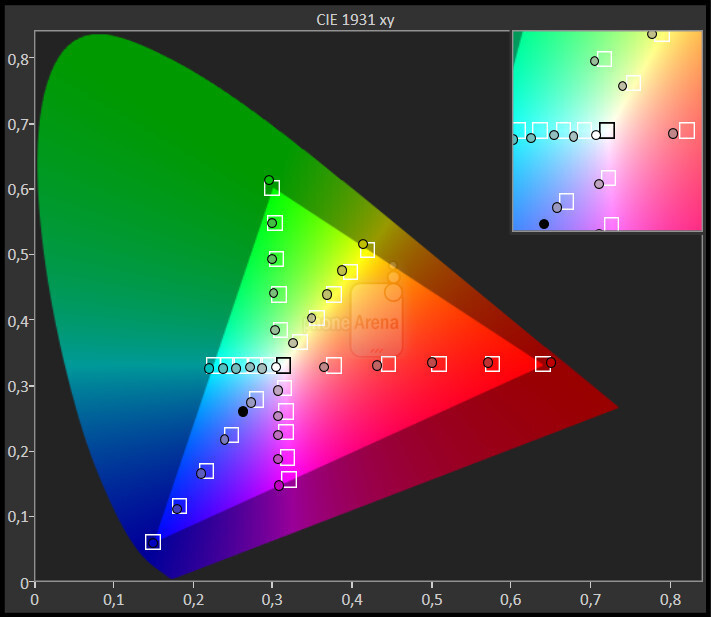