Those are the words often used when speaking about the boom of the Chinese economy in the last few decades, but they could well apply to the largest smartphone maker out of the People’s Republic - Xiaomi (pronounced ‘shaw-me’). The company has recently made strides and reached the top 3 of the world’s largest phone makers, and it has built dominant positions in Asia. We now have its flagship, the Xiaomi Mi 4 (or just Mi 4) in our hands, and it’s time to take a look at how it compares against the mainstream Android flagship of 2014 - the Samsung Galaxy S5.

First, let’s make it clear - the Mi 4 is a flagship-grade smartphone sold at nearly half the price of a flagship. It’s a great value for the money, and that is by design - while many call Xiaomi the Apple of China, its business model with its own app store and merchandise is a lot more like that of Amazon. That is, it is selling devices at low margins, and makes money from the ecosystem, not solely the device.

With this in mind, we can outline the battle of the Mi 4 versus the Galaxy S5. Both being 5-inch-ish 1080p devices with Snapdragon 801 under the hood, it boils down to differences in design, the MIUI (pronounced ‘Me You I’) skin vs Samsung’s TouchWiz, the camera experience, and a few other peculiarities. Let’s explore them in more depth!

The Mi 4 is a compact 5-incher that features a sturdy metallic frame, with only the glossy plastic back spoiling the premium experience, while the Galaxy S5 is an all-plasticky affair.

The Xiaomi Mi 4 breaks the traditional perception of ‘cheap plastic Chinese phones’, as it comes with a sturdy stainless steel frame that gives it a lot of character. The back of the phone is still made from uninspiring glossy plastic that might be practical, but is still a fingerprint magnet. Still, the phone is reassuringly solidly put together. The Galaxy S5, on the other hand, feels much less rigid, and its all-plastic body does not exude any feeling of premium quality as one would expect from a flagship device. The back cover of the S5 features a dot-pattern and we actually do prefer its softer finish over the glossy plastic of the Mi 4, though it's mostly a question of personal preference.

There is also a fairly tangible difference in the size of the Mi 4 and the S5 that one cannot just explain with the tiny variance in screen size (5” on the Mi 4, and 5.1” on the S5). It is rather mostly due to the very thin bezel on the Mi 4, while the S5’s display is surrounded by a much thicker bezer. This makes the Mi 4 easier to operate with a single hand as it is the narrower device - 2.7” wide versus 2.85” for the S5. The S5 is just a tad bit thinner and less tall, though.

In terms of buttons, Xiaomi uses virtual, on-screen navigation keys, while the Galaxy S5 is equipped with a large, physical home key with a fingerprint scanner inside, in addition to two virtual keys on its sides. All else is physical buttons. Those are crafted beautifully on the Mi 4 - they are all on the right hand side, made of aluminum, and are quite clicky. The S5 has its lock key on the right, and volume rocker on the left, and while not terrible, they do not feel as responsive.

The Xiaomi Mi 4, however, cannot brag about any water and dust protection capabilities, while the Galaxy S5 is fully sealed and proudly carries an IP68 rating, meaning that it is completely sealed from dust and can survive immersion in up to 3 feet (1 meter) deep fresh water, for up to about 30 minutes.

See the full Xiaomi Mi 4 vs Samsung Galaxy S5 size comparison or compare them to other phones using our Size Comparison tool.

The 5-inch 1080p display of the Xiaomi Mi 4 is a bit off with a slight bluish tint, but it is sharp and offers calibration settings to please different tastes, while the S5’s slightly larger 5.1” 1080p display comes with a noticeable greenish tint.

The Xiaomi Mi 4 comes with a 5-inch IPS LCD display with a resolution of 1080 x 1920-pixels (Full HD), while the Samsung Galaxy S5 features a tad larger, 5.1-inch screen using a different, Super AMOLED panel, but the same 1080p resolution. Both appear practically equally sharp, with no pixelization noticeable as pixel density on the two is very high: 441ppi on Mi 4 and 432ppi on the S5.

The bigger difference comes in color reproduction. We were disappointed with the lack of proper calibration on Samsung’s Galaxy S5, as it has a very noticeable greenish tint that spoils the experience. You can pick between different screen modes on the S5, but the issue persists even in the better ones.

The Xiaomi Mi 4, on the other hand, also offers control over the colors: you can pick between warm (~7400K), standard (~8400K), and cool (~9500K) for the color temperature, and for each of these options you can also pick between ‘standard’ and ‘brilliant’ color saturation. Color purists will be happiest with the warm setting for color temperature as it is closest to the reference 6500K value, and ‘standard’ saturation mode where there is no artificial overblowing of colors. This is also the option where gamma sits at exactly 2.2, which is the reference value and this indicates balanced brightness levels throughout. In terms of colors, the Mi 4 display adheres to the sRGB color gamut, but the slight blue tint drives colors off their targets, and overall calibration could be better.

We should also mention that the Mi 4 display is laminated, resulting in very low screen reflectance and great viewing angles. AMOLED screens like the one on the Galaxy S5 have also proven to have outstanding viewing angles.

For outdoor viewing, both do a very good job. The Mi 4 and S5 have a very similar peak brightness of around 440 nits, and both filter out reflections nicely, so you can read the screen easier outdoors. 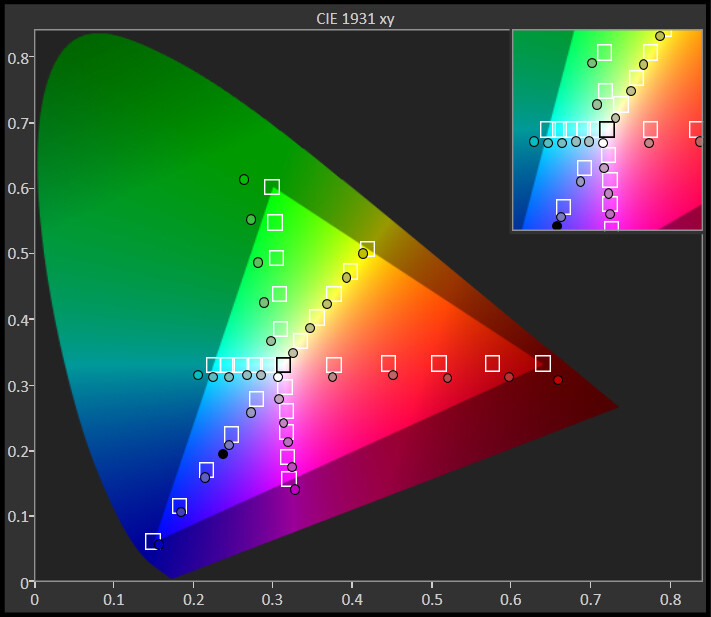