The Moto G Power (2022) continues one of the most successful budget phone series, known to provide ultra-long battery life in a device that costs less than $200.
This latest edition comes with a quite large, 6.5-inch LCD screen that now features a 90Hz fast refresh rate, you get a MediaTek processor inside, a triple camera system on the back (but effectively, only one is useful as the other two are a macro and depth sensor), and the big highlight in the form of a large, 5,000mAh battery.
Unfortunately, Motorola has placed this at the very bottom of the price list, which means that quite a few compromises have been made too. The Moto G Power (2022) makes those mostly in the camera, display quality and performance departments. Should you live with that to save a few bucks? And is the new Moto G Power a phone that you should buy? Let's take a deeper look.
6.0

The G Power is made out of plastic, but we don't really mind: it has this cool wave-like pattern on the back and with that pill-shaped camera system, we'd say that actually looks even stylish for this budget price.
Unfortunately, the front of the phone has these giant screen borders with an extra big one at the top and especially the bottom.
Considering the bigger size and battery capacity, the phone still manages to maintain a reasonable weight. The power and volume buttons are all on the right side and feel clicky, with a decent amount of travel. On the bottom, you get a USB-C port, and on the top you have a 3.5mm headphone jack.
On the left side, you have the SIM tray which is of the hybrid kind, meaning it can either take two SIM cards or a single SIM + microSD, which we like.
On the back, neatly embedded in the "M" Motorola logo is a fingerprint scanner of the traditional kind, which is snappy and super reliable, a big break from mediocre in-screen fingerprint readers.
The 6.5 inch screen is on the bigger side, but it's of the LCD kind with bleak colors. The white balance is off too as colors appear all over the place, and screen quality definitely leaves a lot to be desired.
The hallmark feature is support for 90Hz fast refresh rate, a rarity in the price class, and that does add a bit of needed smoothness to scrolling, and we appreciate having it, but it's not really a substitute for proper color balance.
Display measurements and quality
View all
The CIE 1931 xy color gamut chart represents the set (area) of colors that a display can reproduce, with the sRGB colorspace (the highlighted triangle) serving as reference. The chart also provides a visual representation of a display's color accuracy. The small squares across the boundaries of the triangle are the reference points for the various colors, while the small dots are the actual measurements. Ideally, each dot should be positioned on top of its respective square. The 'x: CIE31' and 'y: CIE31' values in the table below the chart indicate the position of each measurement on the chart. 'Y' shows the luminance (in nits) of each measured color, while 'Target Y' is the desired luminance level for that color. Finally, 'ΔE 2000' is the Delta E value of the measured color. Delta E values of below 2 are ideal. 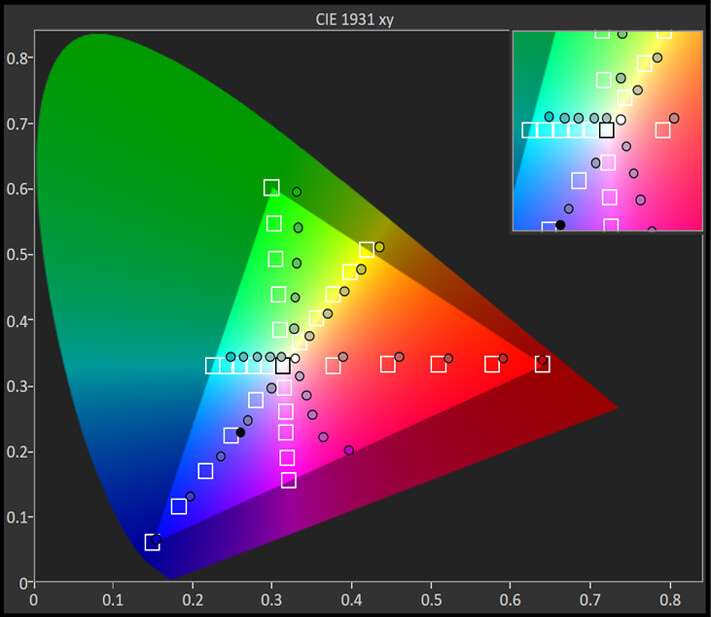 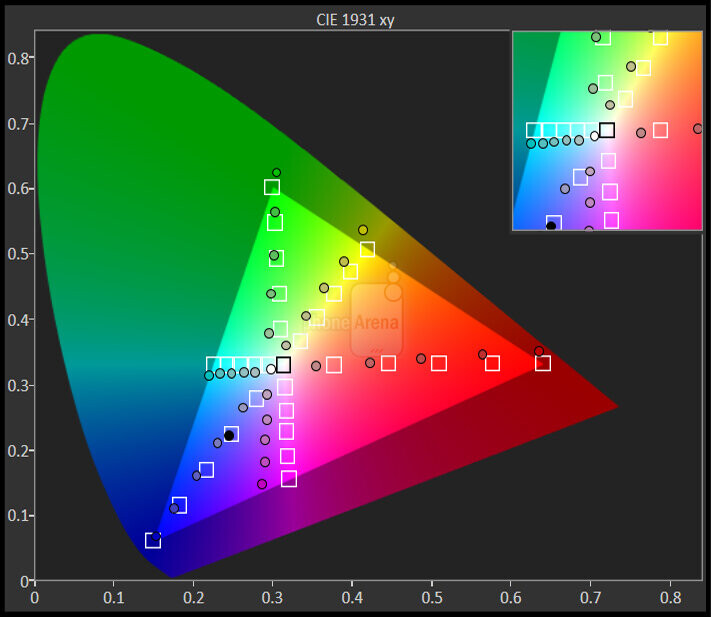 View all
What you don't see above is that the screen is also very reflective, which makes it hard to use outdoors, despite the quite decent peak brightness levels.

Another compromise Motorola made with the G Power is under the hood: the MediaTek Helio G37 chip is slow and despite the super clean Moto take on Android, the phone still feels a bit stuttery. You also only get 4GB of RAM.
Benchmark tests only confirm this as this G Power scores below rivals:
View all
We understand that budget phones have to make quite a few compromises, but this is cutting it a bit too much and even with the clean interface, you can still see quite a bit of stutter.

One of the biggest advantages of buying this dirt cheap new G Power is that it features a gigantic, 5,000mAh battery that just lasts on and on.
In our testing, this phone can easily get two days between charges, something that very few even more expensive phone can brag about. Motorola officially says that you can stretch this to a full 3 days, and we can confirm this is possible if you don't push your phone too much. We also ran our independent battery tests and it scored highly there too:
View all
Interestingly, the Motorola scored about on par with the Samsung Galaxy A32 when it comes to YouTube video streaming, and the score on both is among the best we have seen, so battery life is indeed super solid here.
Unfortunately, charging is pretty slow at just 10W speeds, meaning it will take more than two hours to fully top up the massive battery. There is no wireless charging support, but we are not surprised considering the cheap price.


While it would seem that you get a triple rear camera, the reality is that only the main 50MP camera counts, while the other two are 2MP macro and depth lenses, that are practically useless.
The main camera uses quad binning by default and captures 12.5MP photos that looks decent in good light, but we would point to bleaker colors and loss of detail in the shadows, plus quality quickly falls apart in dim conditions. Again, we have to keep our expectations in check at this price point.
You do get a Night Vision mode that allows you to capture more light in the dark, but colors still look a bit muted and detail is lacking.
On the front, an 8MP camera shoots decent selfies, with warm tonalities and a decent amount of detail.
Video is captured at 1080p resolution, and the only setting you can customize is turn on or off video stabilization. Even with stabilization enabled, however, video footage looks shaky and it easily burns out highlights.
Unfortunately, the camera app is frustratingly slow too and the viewfinder lags and stutters quite a bit.
It's impossible to get a great camera phone at this price, so for anyone who values a good camera, we recommend doubling your budget to the Pixel 5a which has an official price of $450.

Call quality was fine on the G Power and we had no major issues. However, playing back music via the loudspeakers wasn't the best experience, especially if you crank up the volume when sounds start to distort and you lack any form of bass, so you get more of a hissy sound.
Thankfully, you do get a 3.5mm headphone jack at the top of the phone, which makes it easy to plug in wired headphones.

The Moto G Power price is set at about $200, which is about as cheap as new phones get. Below, we list a few phones that are just a tiny bit more expensive, yet offer a vastly superior experience.
Those who want a camera that is anything above mediocre should consider spending a bit more (around $280 at the time of this writing) to a device like the Samsung Galaxy A32 5G, which can take much better looking photos and videos.
Another great option that costs only slightly more is the OnePlus Nord N200 and that offers a 1080p screen, faster performance and a lot more refinement.
If Xiaomi's Redmi Note 10 series are available in your region, those also offer more bang for the buck with generally more powerful processors on board for faster performance.

The Moto G Power is a plain and simple phone with excellent battery life. It handles daily tasks just fine, but the processor is slow for even browsing and especially for more intense tasks. We also found the LCD screen quality lacking and while 90Hz is a cool extra to have, better screen quality and a higher resolution would have been appreciated. The camera is passable and there are too many compromises that you have to make at this price point, and unfortunately it is those compromises that end up hurting the G Power.
It's also disappointing that this phone ships with the older Android 11 version, and Motorola only promises one major update in the future.
The G Power 2022 edition is all about budget and battery life, and if you highly value those, then it will get the job done. Still, if you care about performance or camera quality, you should spend a tiny bit more, which will buy you a vastly more powerful phone all around.

Android and iOS users need to uninstall these 203 apps before their bank accounts are drained
Facebook drains users' cellphone batteries intentionally says ex-employee
All Samsung Galaxy owners need to have the latest version of the Galaxy Store on their phones
T-Mobile may have to stop calling its Home Internet network 'fast' and 'reliable' soon
Google Pixel 6 and 7 owners suddenly getting the January 2023 Play system update, but with a caveat
Samsung officially confirms main Galaxy S23 series pre-order deal (at least in one country)
FCC OKs Cingular\'s purchase of AT&T Wireless