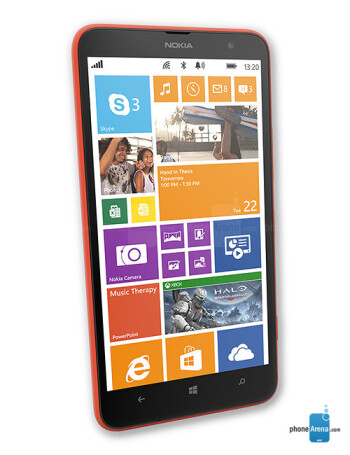 So, firstly i'd want to tell you that i'm an Android fanboy though, using Android over years and years. But i used two Lumia devices, one of them was 520 other one is 1320. Honestly 520 was good enough for entry level smartphone. But 1320 is golden. Though it's midrange (maybe not anymore) phone it felt like high-end one. Fluent UI with very very minor lag or stutter. Good camera experience maybe not the best but. Everything you need in a phone. If you're low on budget and like or love Lumia smartphones buy this one. I'd totally recommend with 9.6/10.

Not the great phone because of the screen which is poor. A little to big. If you have the money to buy better buy Nokia LUmia 1520, its better version of 1320. Nice for car, if you have Nokia cr 123, like you have small tv in it.

I really like this phone! It's very good and speed. Pixels it's high. I have this phone a month only and I love it. Front camera is good enough (for me) but 0.3 MP OK.! Signal is high and I can call someone from everywhere.!

i love this phone

Build quality
10.0
The material of the phone is great
Reception
10.0
Call quality
10.0
The voice is very good
Internet
10.0
The internet speed it's fast and the internet explorer is awesome
Multimedia
10.0
The music and video player it's extremely good
Camera
10.0
The camera is only five mega pixel but with Lumia camera app it's work great
UI speed
10.0
Everyday usage
10.0
I use it for the hole day and its work fine with me
Text input
10.0
It's windows keyboard it's the fastest
Display
10.0
It's work very good under sun light
Battery
10.0
Battery is best thing on it it can reach a day and more

At first when I had it was not bad but then all the sudden the system was taking to much memory off my phone to the point my phone just frozed and even funnier I switched from a galaxy s4 worst mistake ever. So I switched the Nokia for the s5 I was better off..

0 out of 11 people found this review helpful.

i have it and i m using this phone its really awesome guys don't worry of OS windows phone is giving update in june last (wp8.1) than it wil be stand for compete android. go for lumia once guys you will never switch back to android but only if you can understand the power of windows phone

15 out of 15 people found this review helpful.

This is a awesome phablet, its my first phablet.
love the Windows 8 phone style!!!!
Great for office and home usage.
great graphics and speed for my games with the xbox account.
Also great internet speed.
the app store is a little weak on the amount of apps, but thats going to be fixed.

PHONEARENA should remove that it has NFC, IT DOESN'T, on any version of the mobile which are 3 btw. I have the RM-996 one. The phone is great so far. Battery and display are cool. great value for money indeed.

Build quality
9.0
Strong phone with nice back and cover. when u open it up u can see how nice and strong it is
Reception
10.0
Call quality
10.0
Internet
9.0
Great, although the internet explorer is pretty basic but i found a browser named UC browser which turned to be really cool
Multimedia
10.0
Plays HD movies flawlessly even with sizes like 3 gb
Camera
8.0
Good for a 5 mp one and the nokia apps for photo editing and related stuff are really cool.
UI speed
10.0
realy fast
Everyday usage
10.0
Text input
9.0
its my first full touch screen phne as i awlays had a qwerty, bb and nokia. nt still nice and i am getting used to it. after the next update microsoft will have a really fastest touch keypad i guess.
Display
9.0
My bad luck that i got it from another country, the screen had some defect like small white dot to the top right. It only appeared when the theme was white. Other than that it was great esp. with movies
Battery
10.0
Superb. i heavily use wi-fi and media thorughout the day and it still have juice for the day later. Unlike my bb which was a pain in the @**

14 out of 15 people found this review helpful.

awesome phablet for daily use. nokia quality, Windows 8 Mobile OS makes phone VFM. Camera could have been atleast 8MP. In India also it is HSDPA+, not real LTE! call quality is superb! Battery last for 2 days in normal use.

27 out of 29 people found this review helpful.

Two variants of the Nokia Lumia 1320 sequel visit the FCC
Nokia Lumia 1320 sequel to come with 14MP PureView camera on back and 5MP "selfie" camera up front?
Lumia Denim starts to roll out today to selected Lumia models in China
Check out Cricket's Black Friday and Cyber Monday deals
Get a Windows Phone 8.1 handset for free during Cricket's "Back to School" sale
Nokia Lumia 1320 is now official for Cricket Wireless; phablet launches this Friday
Nokia Lumia 1320 available in the US (unlocked), will be launched in the UK next month
Nokia's other phablet to launch January 17th in Malaysia