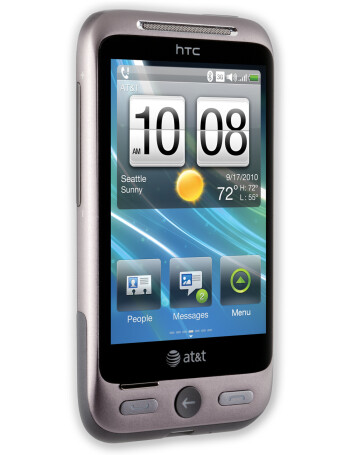 AWESOME Phone.
Build quality: Sturdy and beautiful aluminum design.
Reception: Excellent, always have 4-5 bars everywhere.
Call quality: A little above average.
Internet: Great for a messaging phone and has support for multi-touch. Since its a messaging phone you can get UNLIMITED data for $9.99 a month. (EPIC)
Camera: Descent 3.2mp camera. The only problem is the lack of an auto-focus, but its still good.
UI speed: Its fast but freezes occasionally, but its something to expect because its a feature phone.
Everyday usage: HTC Sense makes it a fun to use phone.
Display:It offers a clarity that you don't see with most feature phones.
Battery: Good 1300mAh battery that will last a few days with heavy usage.

Build quality
10.0
Sturdy and beautiful aluminum design.
Reception
9.0
Always have 4-5 bars everywhere.
Call quality
8.0
A little above average.
Internet
9.0
Great for a messaging phone and has support for multi-touch. Since its a messaging phone you can get UNLIMITED data for $9.99 a month. (EPIC)
Multimedia
10.0
Good.
Camera
9.0
Descent 3.2mp camera. The only problem is the lack of an auto-focus, but its still good.
UI speed
8.0
Its fast but freezes occasionally, but its something to expect because its a feature phone.
Everyday usage
10.0
HTC Sense makes it a fun to use phone.
Text input
10.0
Great virtual keyboard with outstanding auto-correct functionality.
Display
10.0
It offers a clarity that you don't see with most feature phones.
Battery
9.0
Good 1300mAh battery that will last a few days with heavy usage.

I've had the Freestyle for about a year and a half now, and I love it. When I first got it, I loved it, then all previous symptoms occured--freezing, lagging, system error, rebooting, etc. After taking it to the store and having it reset, however, it was amazing. The only reason it freezes is because it is a gsm phone and putting too much info on it (music, external photos, etc.) slows it down. Its music quality is amazing, its reception could be better, but when you're talking you can adjust the volume as you want it. Its interface is pleasing to the eye, and it's easy to see. Typing is easy, when you keep it in the sideways format. Really good phone!

Build quality
8.0
Nice to hold, but easy to drop for clutzes like me :)
Reception
7.0
It has 4/5 bars in most areas, but can drop suddenly.
Call quality
8.0
easy to hear people.
Internet
10.0
I don't have internet
Multimedia
5.0
music's good, but I don't have other multimedia
Camera
7.0
It doesn't zoom, even though package says it does. Only videos zoom. But the quality isn't bad for a messaging phone
UI speed
7.0
Everyday usage
7.0
Easy to use.
Text input
7.0
can hold a lot of text, though att charges more if you go above 160 characters
Display
9.0
Very nice to see, doesn't hurt the eyes
Battery
7.0
I am constantly listening to music, and it lasts me a day and a half. It does drain even when you're not using it, though.

Was great but then became HORRIBLE!

I've had this phone for about 9 months and I LOVED it at first, it was fast, responsive, and nice looking. But then after about 3-4 months of everyday use, it became slower and slower, unresponsive, and SUPER HARD to type/text on. I'm begging my parents for an iPhone or something, ANYTHING BUT THIS!! Loved this phone until it started to die :(

Worst purchase I have ever made! My husband and I were both ready to up-grade so we ordered TWO of these phones. Both of us have different needs and use our phone in totally different ways. After less than one day we are both ready to throw these things in the river. But we have more respect for fish than to feed them trash like this. BOTH turn on and off, BOTH won't hold a charge, BOTH are difficult to type on. That's not to mention that it took us over TWO hours on the phone with tech support. We are not stupid people and we know phones. I am furious!!! Shame on you AT&T for selling such junk!

Build quality
5.0
No bad
Reception
3.0
Squelching and cutting in and out
Call quality
2.0
Thanks for the dropped calls
Internet
1.0
Good luck typing in your websites...from someone who has operated computers since 1981
Multimedia
1.0
HORRIBLE!!!
Camera
1.0
Didn't bother using it because I was too ticked off after dealing with the touch screen and the internet efforts
UI speed
1.0
Sllllloooooooooooowwwwww
Everyday usage
1.0
Who can use it when you can't get the touch screen to work with little fingers or big ones?
Text input
1.0
letter too tiny for a woman who wear a 5 1/2 ring on her ring finger
Display
4.0
Nice but confusing
Battery
1.0
HIDEOUS!!

Worst mistake of my life

I got this phone early December, right off the bat I started experiencing problems. It would freeze up daily, cut off by itself and send multiple of the same text. One day the phone cut off and wouldn't cut back on so I ordered a replacement which took me forever customer care was giving me the run around. When the replacement phone came in what do you know same problem and the sim card wouldn't work. I called to get a new phone but they told me it would charge. DO NOT get this phone you will regret iy.

Good luck, I don't recommend this phone to my worst enemy.

I got this phone refurbished. It kept restarting itself, freezing, lagging like hell, battery drainage. Had to take out the battery several times a day to get it to unfreeze and reboot the phone. Went to the ATT store and switched it for a NEW phone. What do you know, the new phone did the same thing. Even without using it, just having it in my pocket I kept wondering why no phone calls, phone had 'system error.' This phone is garbage it is not a smart phone it is very badly programmed. Only good thing is the metal build. After a month and a week with the NEW HTC Freestyle replacement, phone just gave in and doesn't work at all. The only thing it shows on the screen is 'HTC.' Do not purchase this phone, it is crap; read the rest of the comments. Anyway I'm just going back to a flip phone since I only use phone, no internet and at least I'll be able to make and receive phone calls.

Build quality
6.0
Metal build.
Reception
6.0
OK reception.
Call quality
2.0
When you have it close to your ear, you can't hear anything unless you tilt the phone a certain way. Aside from that this phone restarts itself, errors and freezes out at anytime even during phone calls.
Internet
1.0
It is not implemented in this phone.
Multimedia
1.0
The Operating System on it is crap. It is slow and laggy as hell. Also don't expect any type of support on this phone. ATT will give you the runaround, TECH Support will put you on hold trying to find answers to your questions. You can't 'sync' to it like you would to a smart phone. Pretty useless phone.
Camera
6.0
Camera is alright if you can hold still and so can what you're taking a picture of, else everything comes out blurry.
UI speed
1.0
SLOW, laggs and in not reliable, expect to see a late reaction with this phone.
Everyday usage
1.0
Who would want to use a phone that doesn't work normally or at all at times, everyday?
Text input
1.0
Hope you have real skinny fingers cause my normal sized fingers trigger the letters next to the original letter I'm trying to tap on.
Display
4.0
I do admit, it sells itself because it looks nice. Good if you want to have it sitting on a shelf on an ATT store, not available to use.
Battery
1.0
Battery on this device dies within an eight hour period with no use. If you're going to use your phone or keep trying to use it, it will die withing a 3 hour range. Takes extremely long to charge compared to other phones too.

Wish I had my Samsung back

I had a 1 yr old Samsung phone that had water damage last March and I replaced it with a newer model of the same phone. Well, it wasn't the same phone (my chin kept disconnecting calls), so I returned it within 30 days and after reading several reviews, I cautiously bought the Freestyle. I hate ATT's policies - you are basically screwed if you get a crappy phone, and this is a crappy phone! I've been banned from complaining about it at my house, everyone is so sick of me complaining.
This is the 1st time I've checked into other reviews, and everyone else has the same complaints as I do. I went back to the ATT store twice because I was getting some of my texts in duplicate and triplicate. They couldn't figure it out, I was on the phone with tech support for a long time, trying to solve the problem, as well. Hello... it's the hardware! That problem has resolved, but now the touch screen has gotten so sluggish. When typing texts you hit keys twice all the time because you assume the first try didn't get entered, only to have both letters eventually appear. It's so frustrating. I regret buying this phone. One other note, it doesn't have a memo feature anywhere to store misc. information (my Samsung did). The ATT salesperson couldn't believe it when I stopped back in asking him to find the memo feature on the phone for me. Nope...no memo feature. I have to text myself to make a note of something. I am stuck with a phone that doesn't perform well.

looks and feels good but does not work very good

i got it and now i want to get rid of it!
i got this phone for my bday and at first it was very nice and i loved it but then it started to become very slow and when i hit buttons it would take awhile to respond and i became very upset with the phone so i went back to my old one