In a world where large-screen smartphones dominate the scene, it’s nice to see there is still a selection of moderately sized devices that feature a physical QWERTY keyboard. As one would have it, the new Samsung Galaxy Stratosphere II takes the reins from the original Samsung Stratosphere, which came out near the end of 2011. Though the Galaxy Stratosphere II has a few other devices to compete with, namely the Pantech Marauder and Motorola DROID 4, it still manages to fit nicely in the group while offering a good selection of features.

Included in the retail package is the Samsung Galaxy Stratosphere II i415 smartphone, 1800mAh battery, wall charger with microUSB cable, and user guides.

You can compare the Samsung Galaxy Stratosphere II with many other phones using our Size Visualization Tool.

Below the display are four touch sensitive buttons for back, home, recent apps, and menu, while above the display is a 1.3MP front-facing camera. Along the left side is the volume rocker, which has a nice feel to it, yet the power/lock key on the right side is a bit small and recessed into the surrounding plastic. Up on top is a 3.5mm headset jack, while the microUSB port is on the bottom. Around back you’ll find the 5MP autofocus camera with LED flash, and removing the battery cover will allow access to the microSD memory card slot.

Even though the body of the Samsung Galaxy Stratosphere II has been updated from the original model, it appears to be using a similar display, as the specifications have not changed. It remains a 4” Super AMOLED screen with WVGA 480x800 pixel resolution, which allows for saturated colors, good contrast, and deep black levels. While this is good for the most part, it still suffers from some pixelation and jagged edges when viewing small text. It would have been nice if a higher resolution Super AMOLED screen was used instead, such as qHD, as that would pretty much solve the pixelation issue. 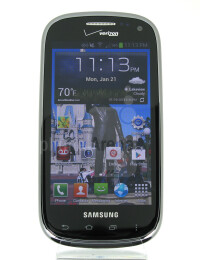 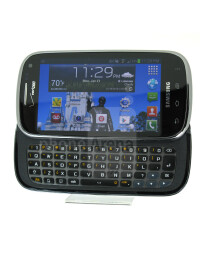