The QWERTY is dying. Once considered a must-have feature on any top-tier smartphone, the QWERTY is beginning to fall by the wayside as touchscreen technology and keyboard software quickly advance. With the original DROID line moving towards mid-range, even Motorola opted for all touch devices on last year’s flagship devices in the Photon, the RAZR and the Atrix. They may have stuck with thin for the follow-up Atrix HD and the rumored forthcoming RAZR HD, but the sequel to the Photon has broken that trend and the Photon Q 4G LTE aims to offer one of the best QWERTY experience this side of Waterloo. Featuring laser-cut keys, individual LED backlighting and a full five rows, the Photon Q certainly makes a strong case for this fading piece of technology. Of course, a healthy feature set such as Android 4.0, 1.5GHz dual core processor, 4.3” ColorBoost display and an 8-megapixel camera don’t hurt the Photon Q’s case either. Read on to find out how the Photon Q compares to its all touch competition.

At first glance the Photon Q 4G LTE does not stray far from the original Photon design, retaining the same color scheme, screen size and funky corner design. Unfortunately Motorola did not carry over the kickstand to this new Photon, but that was likely at the expense of the Photon Q’s physical keyboard. Despite that, size is nearly identical too, with the Photon Q coming in just 1.5mm thicker and half an ounce heavier than the Photon.

You can compare the Motorola Photon Q 4G LTE with many other phones using our Size Visualization Tool.

Sliding open the Photon Q reveals the large, 5-row QWERTY keypad. It is wonderfully constructed with adequate room between the keys, good tactile feedback and a natural layout. The laser-cut keys are each outlined with white LED backlighting that really pops even in bright light. There are plenty of extra keys, including directional arrows and a tab key. It may not be as good as the BlackBerry Bold, but the Photon Q’s keyboard is very good and is quite pleasant to type on.

Around the phone you’ll find the requisite physical buttons, including a camera shutter. They are styled like the original Photon and offer good travel. Next to the microUSB port is a microHDMI port, which seems a bit outdated in this day and age of MHL. The back has a soft-touch trim and a textured coating, making the Photon Q comfortable to hold.

Two big disappointments with the phone is the fixed nonremovable battery and SIM card. We knocked the EVO 4G LTE for its fixed battery, but at least the EVO is super slim and the battery rated at a healthy 2000mAh. The Photon Q is far from thin and only has a 1785mAh battery. The fixed SIM means that while the Photon Q is a global device, it can only be used on Sprint’s terms. This means paying high international roaming rates versus popping in a local pre-paid SIM.

We’ve come to expect a high build quality from Motorola and the Photon Q does not disappoint. The phone feels very solid in the hand, and the spring-assisted slider mechanism glides smoothly while offering good initial resistance. There is a slight amount of wiggle at the top when the slide is closed, but not enough to worry us. All-in-all Motorola has done a good job refreshing the Photon design with the slide form factor, though we would have preferred a higher resolution display.

When the Photon was launched, its 4.3” qHD display was top of the line. Unfortunately the same cannot be said today, and with the 4.7” HTC EVO 4G LTE and 4.8” Samsung Galaxy S III both sporting 720p HD displays in Sprint’s lineup the Photon Q’s display is a bit behind. The 256ppi though not into the 300+ range like the HTC and Samsung is still pretty good.

Like the Atrix HD, the Photon Q’s display features ColorBoost technology which promises to make colors more bright and vibrant. Motorola claims ColorBoost offers the color saturation of an OLED with the performance and efficiency of LCD. However they go about it, we will say that in spite of the lower resolution the screen is still very good, plenty bright and colors do indeed pop. 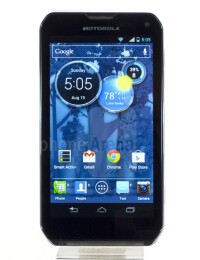 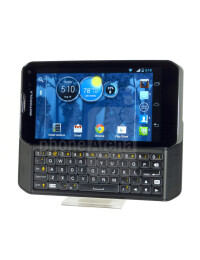