This year had its fair share of crazy phones, and we don't mean unorthodox shapes and forms only, but also unique offerings from reputable manufacturers that really pushed the boundaries of phone-making in 2015.
From crazy flip camera shenanigans, through screens sloping on the sides like a pixelized waterfall, manufacturers went out on a limb with ideas and execution, that's why we are rounding up some of the more unorthodox handsets that 2015 brought onto our unsuspecting heads, check'em out below, and tell us which one is your fave.

The flipping camera phone
With its wacky camera, the Huawei ShotX (or Honor 7i) deserves a pantheon in our ranking of the craziest 2015 phones. Not only does it come with a system that turns the 13 MP rear camera into a front-facing one with the flip of a finger, but was also the first phone that moved the fingerprint scanner on the side, embedding it in the power/lock key.
The sole camera unit has been given an additional emphasis, too, boasting a Sony sensor, f/2.0 aperture, sapphire lens protection, the works. For those worried that the rotation which flips the camera 180 degrees will wear with time, Huawei is quick to assure us that the mechanism can withstand at least two years of usage even if you flip it 132 times a day. Other than the intriguing camera, the Honor 7i is a midranger, with a 5.2" 1080p display, Snapdragon 616 SoC, 2 GB/3 GB of RAM, and 16 GB/32 GB of internal memory, as well as a 3100 mAh battery to back it all up. The dual-everything phone
The crazy, dual-everything V10, feels like it is LG's answer to the dual-edge phones with flexible displays that Samsung outed this year. It is stuffed to the gills with the latest in tech, but the most notable feature is its secondary 2.1" front display that serves as a garage for shortcuts, a notification ticker, or a date and time clock. That's not the only hardware component that the V10 doubles down on, though, as the phone also sports a dual 5 MP front camera, and a dual-tone, dual LED flash for the 16 MP OIS camera on the rear.

The bends-like-Gumby phone
Speaking of dual-edge displays, Samsung really took its line of flexible YOUM screens with plastic substrates to the next level by introducing the unique Galaxy S6 edge back in the spring, followed by its larger, 5.7" S6 edge+ sibling in the summer. The phone offers every little bit of cutting edge tech that the S6 has, such as a record pixel density, 14nm processor, and 16 MP camera with OIS, but comes with a screen panel that is wrapped around both sides, and can serve as a quick access field for shortcuts, favorite contacts, and the like. We can only guess where Samsung will take us next year with those flexible displays, if the rumored Project V foldable phone materializes. The 4K pioneer
Sony's Xperia Z5 Premium arrived as the world's first phone with a 4K resolution display, cramming 8 million pixels in a 5.5" display for the breathtaking 800+ ppi pixel density for the first time on a mobile device. How huge is the gap with the next best thing in pixel density? Well, the Galaxy S6 with its 5.1" Quad HD panel has 577ppi, for instance.
Granted, Sony only runs the screen in the full 2160 x 3840 resolution when displaying high-res pictures in the gallery, or running 4K video in the default player, to lessen the toll on the battery and the graphics subsystem, but that's a tradeoff we can stomach. A 4K screen is not the only unique thing about the Z5 Premium, though - its 5.5" diagonal is a first for the Xperia Z line, plus it also has a finger scanner on the side, and is as waterproof as its smaller Z5 siblings. The Untouchable
When Motorola asked its focus groups a few years back what worries them the most about their smartphones, they replied that they are always conscious they will run out of juice in the middle of the day, or that the screen will break when they dropped their phones. Well, Motorola rolled up its sleeves, and created the Droid Turbo 2 (Moto X Force abroad) with a ShatterShield display and a huge two-day battery.
That's the first time someone is offering a phone with flexible AMOLED, besides Samsung and LG that make them, but Motorola didn't stop there. It tacked a dual digitizer on top, so that if one of the touch layers gets damaged by an impact, the other one can take over. The actual protection from falling face-down on concrete is achieved by two layers as well. The transparent interior lens is made with plastic substrate, too, and won't crack or shatter when dropped, while on top of it is the last, exterior lens layer, which is hardcoated against dents and abrasions.

Overall, Motorola is so confident in the tough and durable display package it has created with ShatterShield, that it gives you four years of warranty on the screen. Yes, you read that right - the screen on your Turbo 2 will be replaced for free if you manage to split or crack it within the first four years of ownership. Granted, it doesn't cover the top exterior lens, but this one is apparently replaceable, and we'd love to have been a fly on the wall when Motorola was testing the four-year warranty claim in its R&D labs. 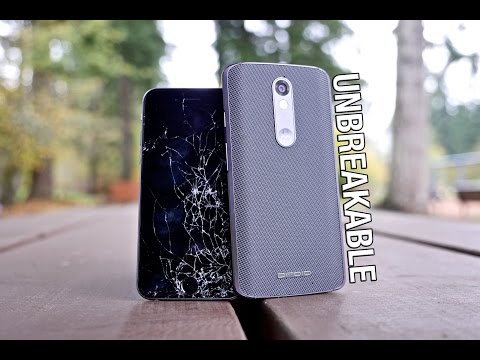