Sony's latest addition to its T-series, the T3, is a 5.3” midranger that is one of the slimmest handsets a brand-name maker has ever done - at 7mm girth, it is ready for a modeling carrier. As with most Sony middle-of-the-road Xperias these days, the phone is outfitted with a modest quad-core Snapdragon 400 chip from Qualcomm and 1GB of RAM, along with an 8-megapixel Exmor RS sensor. Sony puts its design chops front and center with the T3, though, aiming to justify a $400 USD price tag, so let's see if it can succeed in the cutthroat world of Android midrangers...

This one's a looker, with a 7mm steel frame, soft touch back, and a comfortable grip.

Sony's OmniBalance design language stays true to its core in the Xperia T3, with the signature metal power/lock key on the side, and a clear-cut rectangular form. This fashion statement of a phone is built around a metal frame that rims it from all sides, and has a grippy soft-touch rear with sloping edges that makes it very comfortable to hold. Despite its slim profile, the phone feels very sturdy and solid in the hand, thanks to the rigid metal framing.

The power/lock key on the side, as well as the metal volume rocker, and the dedicated shutter key beneath it, are very solid, too, and with a nice clicky feeling to them. About the only gripe we have with the design, are the all-too-thick bezels, which make this 5.3” handset larger than the 5.5” LG G3, for instance.

Sony outfitted the Z3 with a relatively large, 5.3” panel with 720x1280 pixels of resolution, returning a decent 277ppi pixel density. Granted, not everything looks as detailed as on those 1080p displays, but for the vast majority of tasks this pixel density does the job.

When it comes to screen quality, however, Sony's panel takes a step back, and no amount of X-Reality engines or BRAVIA branding can make for the fact that the display exhibits overly cold colors, returning 7698K temperature, compared to the reference 6500K white point. The screen therefore appears rather blueish, and the color saturation is a bit off, especially with the reds and the blue hues, as you can see in the chart below. The viewing angles are also pretty poor for today's standards, with brightness, contrast and color saturation diminishing greatly with the slightest tilt of the phone, and our measurements fully confirm our observation.

Our biggest gripe with the display is outdoor visibility, though. Despite the excellent peak brightness measurement of 569 nits we measured, which rivals the one on the iPhone 5s, the screen reflectance coating is rather poor. It bounces light back to our eyes with an aplomb, greatly diminishing contrast and visibility outdoors, even when the sun is not shining directly on the screen. 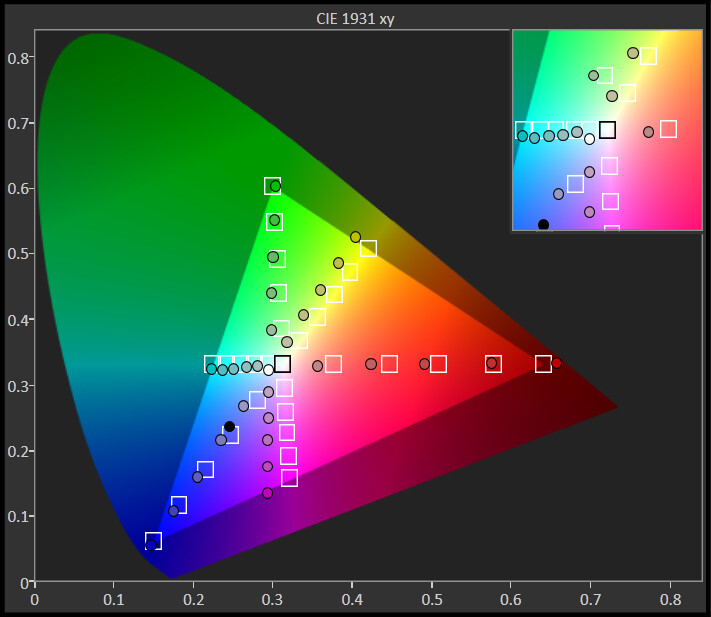