Fast forward six months to April 2017, and we have the brand new Samsung Galaxy S8 – a new edition to one of the best-selling flagship Android phones. But with these new standards set by the Google Pixel, this time it has a higher bar to clear. Additionally, we are looking to see if Samsung has found an answer to some internal issues: has it fixed the battery and is the S8 perfectly safe? And what about that slight stutter that seems to be present on almost every Samsung flagship phone, no matter how powerful it is? Has the camera improved? And what about that fancy new bezel-less display: is it really the game changer it is painted to be?

We examine all these things and more in our detailed Google Pixel vs Samsung Galaxy S8 comparison, starting right away.

The Pixel is a well-built phone. The Galaxy S8 is lush, prestigious, but its glass back catches fingerprints. The S8 has also got water-proofing and… an extremely weirdly positioned finger scanner.

The Google Pixel is a well-built phone. It features a solid aluminum construction with a distinct glass accent on the back that gives it personality. It has a nice heft and sits well in the hand.

The Galaxy S8, on the other hand? It’s stunning. With glass on the back and the front, and a metal frame in the middle, the S8 looks shiny, lush, prestigious. It’s taller, noticeably taller, but it’s not wider and that is important because it turns out that it is this lack of extra width that allows such a phone to be comfortable to handle. But it’s not as practically built as the Pixel: the glass on the back of the S8 becomes smudged with fingerprints in a matter of seconds. It is not too big of a deal, but it must be noted.

It has one important advantage over the Pixel, though: it’s water-proof, with an IP68 rating, which means that it can remain under 1.5 meters (about 5 feet) of water for up to 30 minutes.

It also has one big disadvantage: an extremely weirdly positioned fingerprint scanner! For whatever reason, Samsung has put the finger scanner right next to the camera on the back, which a place that is neither easy to reach, nor particularly intuitive. You get used to it, but you inevitably place your finger on the camera while reaching for the finger scanner, and it’s just not very convenient. The Pixel also has its fingerprint reader on its back, but in a much more intuitive central position, where your finger naturally rests.

Then, there are the details: the misaligned USB-C charging port on the bottom of the S8 is one detail that is small, but that you cannot unsee. There is still a very slight camera bump on the S8, while the Pixel’s camera does not stick out. In those tiny details, the Pixel seems like the more refined phone of the two.

See the full Samsung Galaxy S8 vs Google Pixel size comparison or compare them to other phones using our Size Comparison tool.

Stunning, just stunning. These are the thoughts that come to mind after looking at the S8’s bezel-less display. The Pixel features a good display, but just good does not cut it here.

But what most eyes will focus on is not those tiny details: it’s the screen. And the Galaxy S8 has an absolutely gorgeous and in many ways impressive new display. It’s bezel-less, almost magically so, and looking at the large chins on the top and bottom of the Google Pixel, it feels like looking at the distant past. Who needs those bezels anyway and why were they there for so long?

We have a 5.8-inch display on the S8, but it is taller and has a different aspect ratio than the current 16:9 standard. This means that you cannot and should not directly compare the diagonal (5.8” on the S8 vs 5” on the Pixel), as it is not an accurate measure given that we have different screen shapes. Put simpler, the difference in screen size is not as big as those numbers might have you thinking.

What you should look at is the actual area of the screens. We have calculated this for you: the Galaxy S8 screen has an area of some 13.26 in2, while the Pixel display has an area of nearly 10.7 in2. This works out to some 24% difference, and this is approximately how much more screen space you get with the Galaxy S8.

Looking at the tech specs, both phones use AMOLED displays, the 5.8” one on the Galaxy S8 comes with a Quad HD+ resolution of 1440 x 2960 pixels, while the Pixel features a 1080 x 1920 pixel resolution. Side note here: the Galaxy S8 has its resolution lowered by default, but this can be changed from the settings menu. The S8 is slightly sharper once you bump up the resolution, but that difference is hard to notice in regular use. You do notice it, though, if you are among the few who use your phone for virtual reality.

While most screens these days are sharp enough, the difference in color reproduction still remains very different depending on the phone. Both the S8 and the Pixel offer screens that feature different color settings. By default, both phones feature slightly boosted, oversaturated colors that impress at first sight and most people will like them. If you are a photographer or a professional looking for color accuracy you would want closer adherence to the sRGB color standard that is used globally. You have a separate mode on each of the phones that switches the screen to that more toned-down and accurate standard. In both those modes, colors look great on both phones, but our detailed measurements show that the color reproduction on the Galaxy S8 is just a bit more accurate and better tuned.

The S8 display also features the newest Gorilla Glass 5 protective glass for the display, and this is important for an all-glass phone that might have to survive more than one drop during its lifetime. 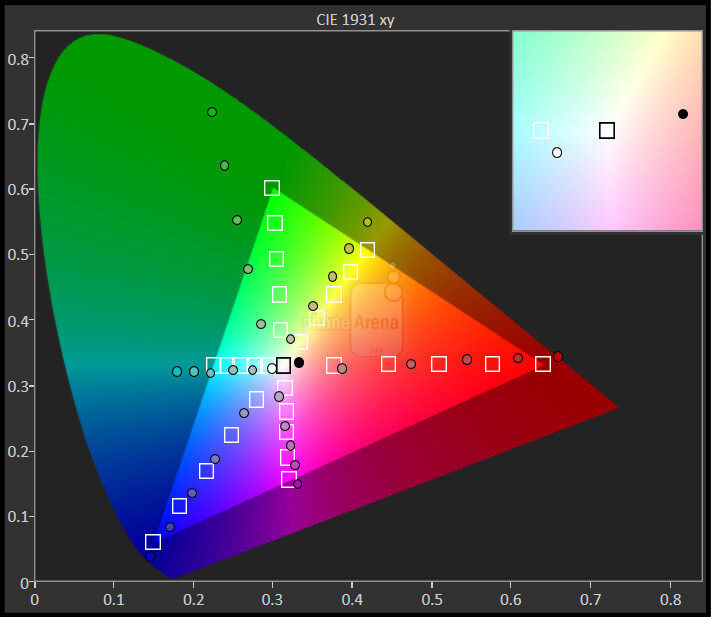