Who knows how well Motorola is competing in the high-end segment of the smartphone market, but we absolutely know that they’ve become a standout leader in the entry-level sector. And how is that? Well, they managed to deliver an affordably priced smartphone last year with the Moto G – one that won over many people due to its low, outright cost, but without seeing a whole lot of compromises to its performance.

Back for round two, the phone’s successor takes the same approach of catering to those on a tight budget, but it’s now sporting a larger chassis due to the increase in size of its display. On top of that, it receives the usual set of hardware upgrades in the process – so it’s very much bears the traditional qualities of any successor. Stickered with the same starting cost of $179.99 outright, the new Moto G aims to continue being the darling in the entry-level segment of the market.

This year’s model retains the same design language as before, but it’s now become a handful to operate due to its increase in size.

What’s most apparent with the design of the new Moto G is its overall increase in size. Quite frankly, gone is the comforting feel of the original’s size, which made it the perfect size for one-handed usage. Instead, we see its footprint upped to 5.57 x 2.78 x 0.43 inches – a significant increase over its predecessor’s size. In fact, it’s just as large as the new Moto X!

Going with the same plastic construction, we still appreciate the fact that it employs a superficial level of customization courtesy of its replaceable back cover. Our particular review unit sports a uniform look with its all-white casing, but the various Motorola Shells for the phone allow us to customize its look a little bit. In terms of construction, it feels slightly better than the original model, but don’t think for a moment that its matches the sturdiness of the new Moto X.

Indeed, the phone doesn’t deviate from the design language established by its predecessor, evident by the subtle arch of the chassis, button placements, and that oh-so snug dimple in the rear where the Motorola logo is placed. For an inexpensively priced thing, we can’t expect a whole lot, but the overall package is still a pleasant one.

Along the right edge of the phone, we have its power and volume buttons, which are raised slightly and offer decent tactile responses. The microUSB 2.0 port is situated in the rear just like last time, while the 3.5mm headset jack and noise canceling microphone are placed on the top. Below the earpiece, we have its light and proximity sensors – while nearby to the right of the earpiece is the LED notification light. Unlike the Moto X, the new Moto G sports two front-firing speakers. Meanwhile, removing the rear plastic casing grants us access to its microSIM and microSD slots.

Increasing in size, the display continues to be detailed, but we’re most surprised by how well this IPS panel is able to precisely reproduce colors.

The phone’s larger dimension is attributed to the bigger 5-inch 720 x 1280 (720p) IPS display that Motorola has decided to bless the new Moto G with. Needless to say, this decision gives it a size akin to today’s contemporary, high-end flagships. Certainly, its 294 ppi pixel density figure isn’t outstanding, but it’s still nonetheless effective enough to make out some fine details in the web browser.

Interestingly enough, even though the IPS panel has weaker viewing angles than the AMOLED display in the new Moto X, the panel present here is able to best its sibling in the department of outdoor visibility and color reproduction. Starting with the former, the screen manages to churn out a maximum brightness output of 390 nits, which is indeed marginally better than the result we’ve seen from the Moto X, but it’s still something that requires shielding when it’s viewed under direct sunlight.

Moreover, we’re most astounded by its accurate color reproduction – one that clearly is more spot-on than Motorola’s flagship in the Moto X. To be fair, however, its color temperature of ~8200 K makes the screen exhibit a cooler tone at various viewing angles. Despite that, it accurately reproduces varying degrees of color gradients more precisely than the Moto X’s display. For what it’s worth, we’re generally content with the overall quality of the Moto G’s display. 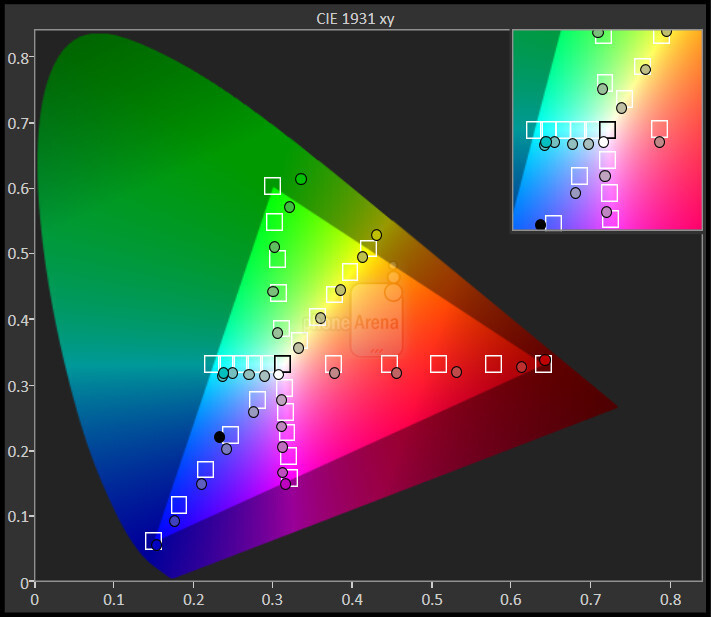