Over the past few months, Verizon has been pushing out a number of smartphones that operate on their 4G LTE network, but there remains large areas of the population that are still only covered by 3G EVDO. For them, their smartphone choices have started to become more limited, especially if they are looking for one with a QWERTY keyboard and that doesn’t break the bank. Verizon’s answer to this is the new LG Enlighten, which combines Android Gingerbread, a 3.2” display, camera, and a physical keyboard with a low 2-year contract price of $79.99.

Included in the retail package is the LG Enlighten VS700 phone with a 2GB pre-installed microSD memory card, 1540mAh battery, wall charger with microUSB cable, and user guides.

The overall design of the LG Enlighten isn’t too remarkable, as it is all-black in color and has a smoke-gray chrome rim around the edge of the display. But for the price, it feels well made and fits comfortably in the hand. On the front is a small 3.2” HVGA (320x480) TFT display, which is what we saw last year on the LG Vortex. It does an OK job, as text is legible and images look good, but for some reason it is missing an ambient light sensor to automatically adjust its backlight when moving between a dark and bright environment. We can understand LG not using a larger WVGA display to keep costs down, but they still should have included an ambient light sensor. There is a proximity sensor that does turn the display off when it is next to your face during a phone call.

You can compare the LG Enlighten with many other phones using our Size Visualization Tool.


The sliding mechanisms on the LG Enlighten is spring-loaded, just like on the LG Ally, and doesn’t require you to move it all the way for it to open the keyboard from underneath. We like that the Enlighten has a 4-row keyboard with dedicated number keys across the top, and that all they keys are individual, instead of being one large membrane. Though after typing on it for a few minutes, we noticed that there is not much space between the keys, which does increase the amount of accidental key-presses if you’re not paying attention. Having the bottom row split by the Space key is also kind strange and requires some getting used to. Still, LG does a decent job with the keyboard considering the limited amount of space for it to fit into. 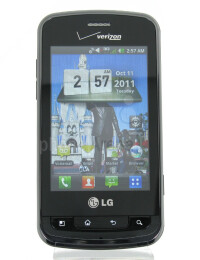 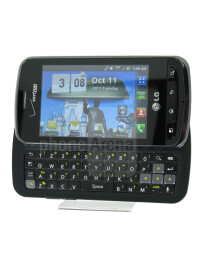 Smartphone production was in decline in 3Q22, according to the latest report
Vote now: Have you ever rooted your smartphone?
New and existing T-Mobile customers can get a huge lifetime 5G Home Internet discount for Christmas
Samsung pushes December security patch to Galaxy Z Fold 4, fixes more than 80 vulnerabilities
AI chatbot predicted to replace Google in a couple of years
Apple makes big changes to App Store pricing and adds 700 new price points