By Chris P.
16
Introduction and Design


Update: You can now read our Huawei Mate 8 review!

From the point of view of Huawei's product portfolio, the Mate S is a weird addition to its high-end roster. A mixture between the P and Mate lines, the S strikes a balance between thinness and size, all the while hitting the right notes when it comes to looks. No, it doesn't look 'cool'. It looks beautiful.

But during our week with the Mate S, we couldn't shake the feeling that it's something of a gap filler — a sort of stand-in until the Mate 8. Sure, you could argue that its smaller size is more than enough to justify an excursion outside the established product matrix, but a new line for the sake of a new line? Sure, why not. But that only complicates things for the Mate S, which now has quite a bit to prove — especially at €649/~$650.


The black border encircling the display panel
Let's see if it's convincing enough.

You'll go 'my precioussss' all over it in no time whatsoever!

Whether you like large devices or not is besides the point. The Huawei Mate S is a beautifully crafted piece of telephony goodness, and one that's sure to attract eyeballs.

More specifically, we start off with an aluminum body with nary a disagreeing element to clash with the uniform looks of the phone. Clear-cut lines, rounded corners, chamfered edges, and display glass that seeps into the frame masterfully. Add to that a thin, 0.28 inch (7.2 mm) profile, and you've got yourself one of the most striking phablets currently on the market. Just handling the Mate S is consistently rewarding, and so we loved fondling it. And that says a lot when you go through literally hundreds of devices a year.

Of course, the Mate S isn't just a pretty face, and is engineered with reason. The slim body makes handling the device easier, and the slightly rounded back helps too. Sure, at 5.5 inches and ~74% screen-to-body ratio, it's not exactly a one-hand device, and that's further amplified by its rather slippery rear and big black border encircling the actual display panel. But as a concern, these are easily forgiven by on-the-target hits like the metal volume rocker and power key, the two of which are easy to reach on the right side. Both of these are a joy to use, with extremely good feedback, just the right height, and a soul-satisfying, pronounced 'click' to them.

Finally, we ought to mention the rear-mounted fingerprint scanner. Obviously, this particular setup has grown in popularity lately, though it's definitely true that there's a notable — but acceptable — learning curve to go through before you feel right at home. Even then, however, you'll find that unlocking the phone when it's laying flat on a surface is kind of a hassle — we ended up using the pass code quite often whenever that happened.

Shades of orange look red. And that's a problem that you can only partially solve.

AMOLED panels have recently grown into a significant trend within the industry, and while we've seen Samsung make some great progress in terms of color accuracy and brightness potency, the unit on the Mate S misses both these targets.

In short, the 5.5-incher of the Huawei Mate S, while pleasant to look at, is actually fairly disappointing for a high-end device. And no, it's not because Huawei has decided to skip over Quad HD and instead stick to a standard (and perfectly sufficient) resolution of 1080 x 1920 (401 ppi). More worrying are the non-trivial disparities between target and actual color reproduction.

For example, at over 7700K, the screen on the Mate S is overly cold and therefore bluish-looking, though you can tweak color temperature and correct for this. What you can't do is fix the messed up color reproduction of the unit, so prepare for overly saturated colors that distort reality and look artificial. Given how Android and the entirety of the internet is coded with a different color gamut (sRGB) in mind, this is certainly a drawback.

Finally, on brightness. We measured a peak of just under 350 nits, which is on the lower end overall. Still, it being winter-y around here, we ran into absolutely no trouble — even on the odd day when the sun was up and shining — but you may feel otherwise once summer gets here. Unfortunately for Huawei, the minimum brightness of the panel (6 nits) is just too high for comfortable usage at night, and we can't say we were impressed by the performance of the ambient light sensor. It consistently let us down and forced us to manually adjust how much light goes through the pixel matrix, which is extremely annoying.

Not off to a good start. 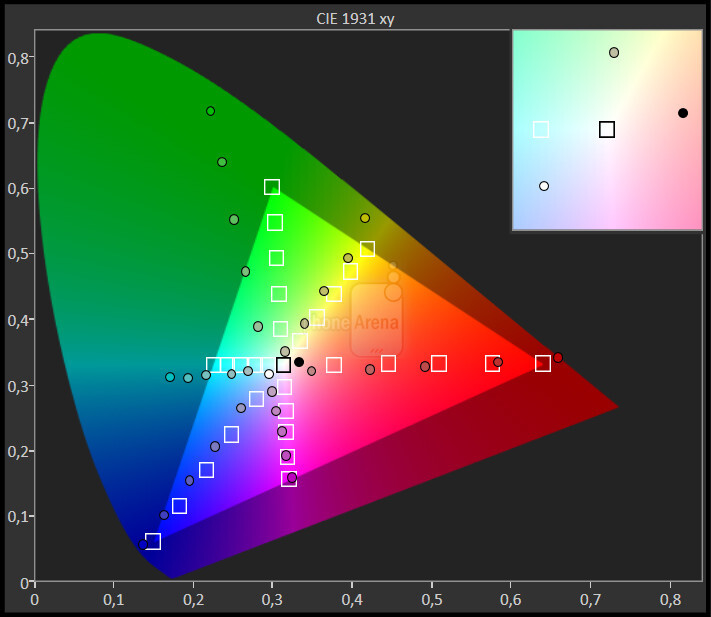 This is what iPhone 13 Portrait Mode for video might look like
Huge Samsung Galaxy Watch Active 4 leak reveals sleek design and colors
Poll: Would you buy the Sony Xperia 1 III at $1,300?
Apple may release the iPhone 13 on September 24, analyst tips the event date

Will this year's 5G iPhone 13 models look like the renders in this video?
Samsung Galaxy Z Fold 3 and Z Flip 3 have already entered production: tip
Samsung has reportedly started work on Android 12 for the Galaxy S21 series
Samsung US stops selling the Galaxy Z Fold 2
The world's reliance on TSMC could be disastrous
Social media expects Apple to try again with this color for the iPhone 13