Hesitation, it’s not something we’ll be seeing much from HTC this year, seeing that they’re aiming for a more aggressive approach this year. In comparison to last year, HTC isn’t wasting any time at all in bringing to market its line of prized smartphones. In fact, they were quick to launch the HTC One M8 before most of the competition, but in doing so, they’re fully aware that diversity is essential in giving consumers choice. Not surprisingly, that’s where the HTC One mini 2 comes to mind, as it launches in a relatively close time frame to HTC’s flagship. Having two options available, the question that remains is which of the two to side with.

Okay, the difference between these two isn’t all that shocking. Quite simply, it’s a matter of size preference, so those who don’t like the larger size of HTC’s flagship will appreciate the more form-fitting nature of the HTC One mini 2. Employing the same design language, there isn’t any shortage with their premium constructions – so there’s no compromise to their beautiful, awe-inspiring looks. We definitely like the two equally, but as we’ve mentioned already, it ultimately boils down to size preference.

Besides the obvious size disparity, the other notable differences are mostly cosmetic – like the placement of their 3.5mm headset jacks and power buttons. However, it should be noted that the HTC One mini 2 lacks an IR blaster – reducing its functionality over its esteemed sibling. At the same time, we have different cameras in two with them, which we’ll expand on more later. Aside from that, they both feature dual front-firing speakers with HTC BoomSound, microSD slots, nanoSIM slots, and 5-megapixel wide-angle front cameras.

See the full HTC One mini 2 vs HTC One (M8) size comparison or compare them to other phones using our Size Comparison tool.

Bearing that “mini” name, the HTC One mini 2 packs along a smaller 4.5-inch 720p display – where as its beefier sized sibling bears a mightier 5-inch 1080p one. Naturally, the HTC One M8’s display is sharper and crisper looking, but details are still plentiful with the HTC One mini 2’s display.

Interestingly enough, they employ Super-LCD 3 technology, so it’s not surprising to us that they deliver nearly the same potent brightness output – allowing us to make out their screens with the sun present. Looking at them straight on, colors have a punchy tone to them, but it seems as though the One M8’s display has the better viewing angles. Overall, they nearly match one another in many areas, but to our eyes, the One M8’s screen still proves to have the charm to catch our attention.
Display measurements and quality
View all
The numbers below represent the amount of deviation in the respective property, observed when a display is viewed from a 45-degree angle as opposed to direct viewing.
View all
The CIE 1931 xy color gamut chart represents the set (area) of colors that a display can reproduce, with the sRGB colorspace (the highlighted triangle) serving as reference. The chart also provides a visual representation of a display's color accuracy. The small squares across the boundaries of the triangle are the reference points for the various colors, while the small dots are the actual measurements. Ideally, each dot should be positioned on top of its respective square. The 'x: CIE31' and 'y: CIE31' values in the table below the chart indicate the position of each measurement on the chart. 'Y' shows the luminance (in nits) of each measured color, while 'Target Y' is the desired luminance level for that color. Finally, 'ΔE 2000' is the Delta E value of the measured color. Delta E values of below 2 are ideal. 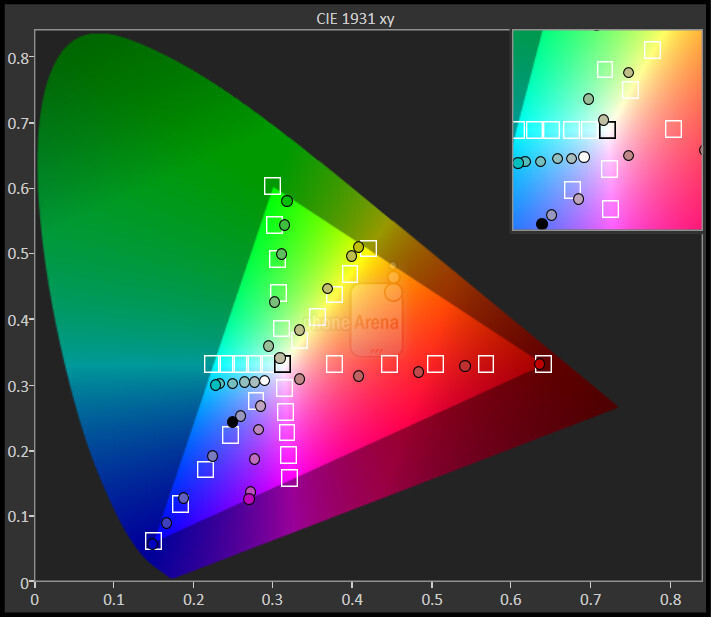