Once again, Sony has unleashed a monster upon the world, this time around called the Xperia XA1 Ultra. It’s the bigger sibling to the XA1, packing most of the same hardware in a larger form factor, with a couple of improvements.

But besides its size, the XA1 Ultra has a few more things going for it: a couple of, as the company calls them, “high performance” cameras, a new yet classic Sony design encased within a metal frame, and an edge-to-edge full HD screen.

But while its size may suggest otherwise, the XA1 Ultra’s specs put it firmly into mid-range territory, which may be a bit of a problem for all the spec chasers out there. So let’s dive in and see whether Sony’s latest phablet holds up under deeper scrutiny:

A classic Sony in a supersized form factor

Like it or not, Sony’s carved its own little niche in terms of smartphone design and is steadfastly sticking to it. This is very much the case with the XA1 Ultra, which carries that classic, ultra-tall Sony look, but with a couple of extra tweaks added on top.

But first, let’s address the elephant in the room – which is, coincidentally, the XA1 Ultra itself. This thing is absolutely gigantic, putting to shame most every other device that dares call itself a phablet. And while this isn’t a bad thing per se, the usability costs associated with such a huge device don’t entirely feel justified.

However, one-handed use isn’t as bad as one would expect it to be – while it could never be called a comfortable experience, it’s still entirely within the realm of possible for more straightforward tasks, such as scrolling through your Twitter feed. The biggest reason for this are the XA1 Ultra’s non-slippery back and sides, a change from the smaller XA1 which makes adjusting your grip to reach the further parts of the screen a less risky experience than it would otherwise be with such a big device.

But while the phone itself sits well in the hand and feels sturdy and solid, it sure doesn’t look so – there’s a ton of seams between the different panels, somewhat diminishing the otherwise good-looking design. As for the buttons, both the volume rocker and the power button did their job well enough. However, the dedicated camera key is just all-around bad – it’s mushy and way too easy to press, while also not providing enough feedback.

At a whopping 6 inches, the XA1’s display is its centerpiece, debuting a newish visual design for a Sony phone, no side bezels present. Well, almost – turning the display on reveals a pair of sneaky black borders on its sides, which diminish this effect. The panel itself is a full HD one, with a pixel density of 367 ppi, which isn’t the best, but should be more than enough for everyday usage.


But what’s pleasantly surprising here is the XA1 Ultra’s color reproduction, which is actually pretty good for a mid-ranger, thanks to its accurate blues and greens. However, yellows tend to be a bit greenish, while reds are overall a bit weak. Still, compared to, say, the XZ Premium, this panel is better in terms of accurate color reproduction, though it’s still a tad too blueish.
Display measurements and quality
View all
The CIE 1931 xy color gamut chart represents the set (area) of colors that a display can reproduce, with the sRGB colorspace (the highlighted triangle) serving as reference. The chart also provides a visual representation of a display's color accuracy. The small squares across the boundaries of the triangle are the reference points for the various colors, while the small dots are the actual measurements. Ideally, each dot should be positioned on top of its respective square. The 'x: CIE31' and 'y: CIE31' values in the table below the chart indicate the position of each measurement on the chart. 'Y' shows the luminance (in nits) of each measured color, while 'Target Y' is the desired luminance level for that color. Finally, 'ΔE 2000' is the Delta E value of the measured color. Delta E values of below 2 are ideal. 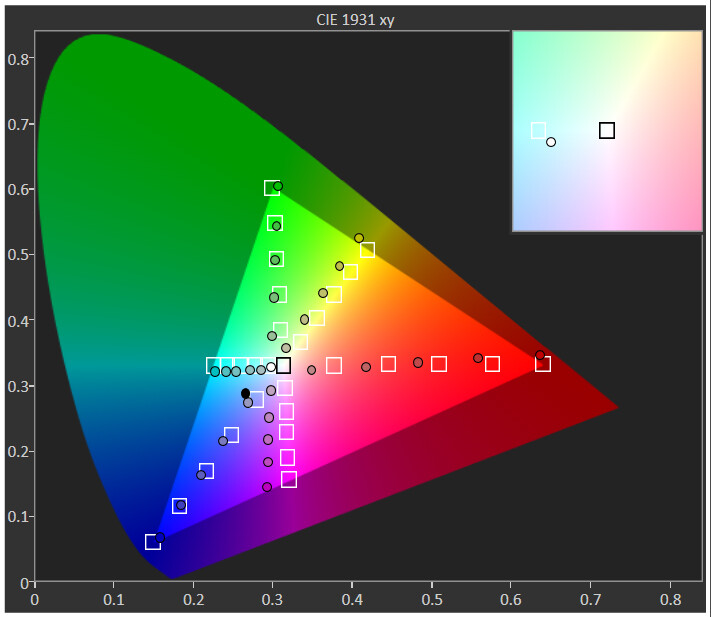 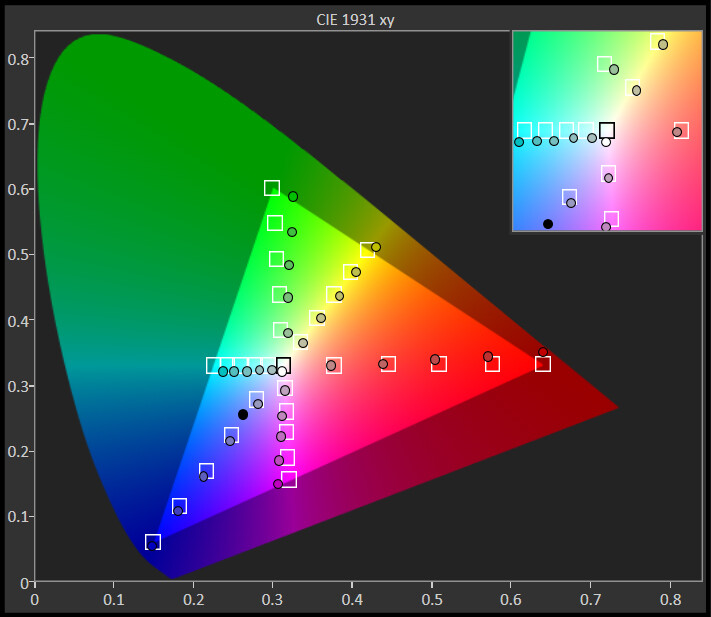 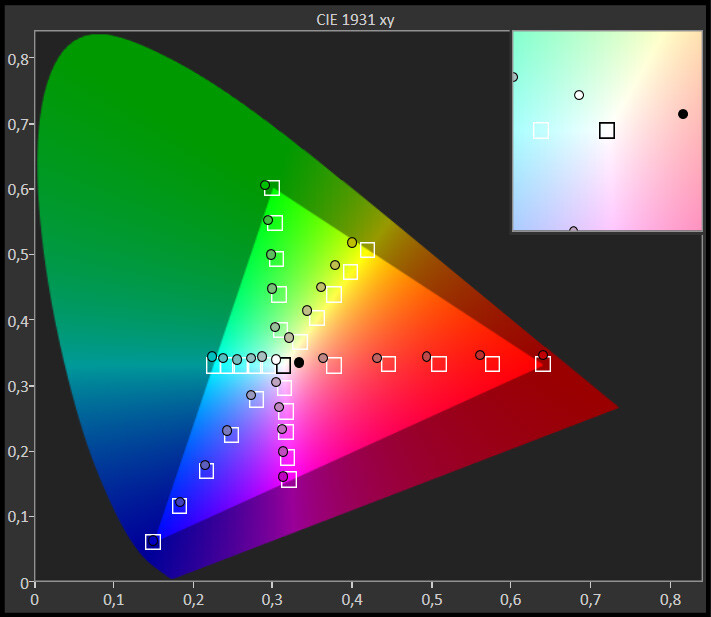