The Motorola Droid Turbo joins the countless army of Android device right in the top ranks, as it packs probably the most impressive combinations of the latest silicon, a remarkably high-res display, and one of the largest batteries. Being at the very top of the Android rankings, however, exposes it to competition from all sides, including from the best selling iPhone 6.

It keeps visual style much more appealing, even if that means making some other compromises.

Which one would be the better choice for you? Let’s find out.

The Turbo is a true ‘Droid’ soldier with almost military look. The iPhone 6, has svelte looks with an all aluminum body

The Turbo is a true ‘Droid’ soldier: powerful, with an armored, serious, almost military look. This is a style chosen on purpose, so that even the outwards masculine appearance of the device tells you it’s all about real performance power. The feeling is reinforced by the sturdy materials used to build the phone: there is a metalized glass fiber (MGF) and a nylon fiber version. The MGF sports a rubbery, utilitarian feel, while the nylon fiber has a very distinct natural fabric texture. The back of the phone is also reinforced with Kevlar fiber, and the whole phone features a nano coating so it’s water-repellent (not waterproof, though, so do not submerge it in water).

The iPhone 6, on the other hand, features a much more elegant body that would appeal equally to a much wider pool of people. While the Droid Turbo is on the chubby side, Apple’s handset is also very slim: in fact, with the Turbo measuring 0.44” thick (at its thickest), and the iPhone 6 clocking in at 0.27”, the Droid is nearly two thirds thicker than the iPhone. The iPhone is also the smaller of the two in all aspects, but most importantly - it’s narrower, making it easier to use with a single hand.

In terms of buttons, we have on-screen navigation keys on the Droid Turbo, with physical buttons of reasonable size and comfort on the right side. The iPhone 6, on the other hand, comes with high-quality, metal buttons: the lock key handy on the right, and the volume rocker on the left, and all are very clicky and easy to press.

See the full Motorola DROID Turbo vs Apple iPhone 6 size comparison or compare them to other phones using our Size Comparison tool.

The 5.2“ Quad HD screen on the Droid Turbo is one of the sharpestout there, but it's ruined by inaccurate colors , while the not-so-sharp iPhone 6 has pleasing colors

The Motorola Droid Turbo comes with a 5.2-inch AMOLED display with a resolution of the impressive 1440 x 2560-pixels (Quad HD), while the Apple iPhone 6 features a slightly smaller, 4.7-inch screen of the IPS LCD kind, but with a much lower, 750 x 1334-pixel resolution. The Droid Turbo’s screen is remarkably sharp, with a pixel density of 565ppi, one of the highest we’ve seen on a smartphone, whereas the iPhone 6 features pixel density of 326ppi, decent, but definitely not on par with the one of the Turbo. In practical terms, this is a difference that is best seen during reading, when looking at text in tiny fonts, and is not all that evident in other cases.

Looking at colors, we’re not impressed with the AMOLED screen of Droid Turbo, though. It has excellent color temperature with accurate greyscale balance, but colors are way oversaturated, but inaccurate. The improper gamma also gives it an additional “contrast boost”, which is not accurate as well. The iPhone 6, on the other hand, has a slightly cold, bluish whites, but for all else it is pretty accurate.

For outdoor viewing, the Droid Turbo is rather tough to read with the sun present. The iPhone 6 is much easier to use outdoors. That's mostly thanks to its excellent maximum brightness of 600 nits, while the Droid Turbo is mediocre in this aspect, peaking at just 248 nits when measured displaying all-white screen.
Display measurements and quality
View all
The numbers below represent the amount of deviation in the respective property, observed when a display is viewed from a 45-degree angle as opposed to direct viewing.
View all
The CIE 1931 xy color gamut chart represents the set (area) of colors that a display can reproduce, with the sRGB colorspace (the highlighted triangle) serving as reference. The chart also provides a visual representation of a display's color accuracy. The small squares across the boundaries of the triangle are the reference points for the various colors, while the small dots are the actual measurements. Ideally, each dot should be positioned on top of its respective square. The 'x: CIE31' and 'y: CIE31' values in the table below the chart indicate the position of each measurement on the chart. 'Y' shows the luminance (in nits) of each measured color, while 'Target Y' is the desired luminance level for that color. Finally, 'ΔE 2000' is the Delta E value of the measured color. Delta E values of below 2 are ideal. 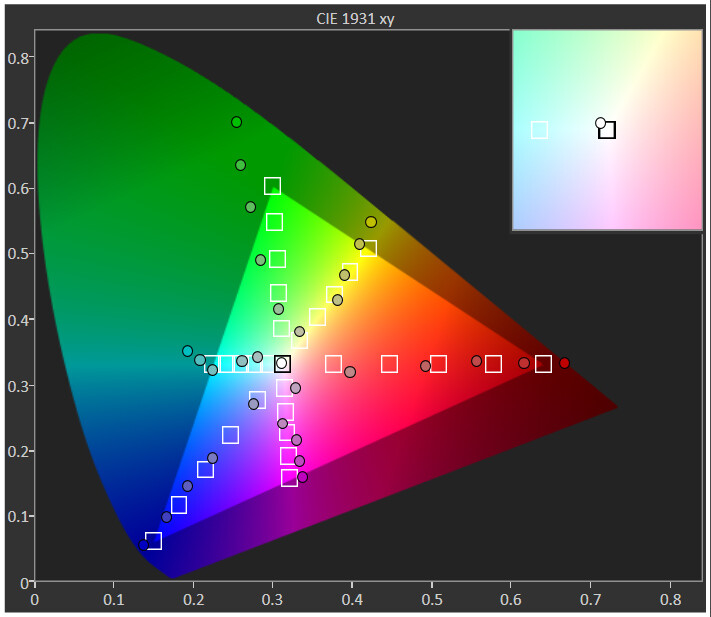 People are wasting no time buying the heavily discounted Galaxy S22 Ultra
Apple's most "tablety" iPad plummets below Cyber Monday pricing
Hurry up and get Samsung's massive Galaxy Tab S8+ at this excellent 'clearance' price by Christmas
You can currently nab the ludicrously fast 2022 11-inch iPad Pro for a cool discount
Face ID out, “Apple Ring” in! Google might hold the secret to the next huge iPhone innovation?
13 years after the Steve Jobs iPad, Apple to copy Pixel Tablet design, making the best iPad ever?