World's thinnest smartphone is rebranded and promoted with sexy ad

posted by Alan F.
@wolfcallsputs
Dec 29, 2014, 3:19 AM
Back in October, we told you that the world's thinnest smartphone, the Gionee Elife S5.1, was going to be rebranded by U.K.firm Kazam. Well, sure enough, the device is now known as the Kazam Tornado 348, and the 5.15mm thick handset can be purchased online for the equivalent of $388 USD. If you're interested in ordering the phone, click on the sourcelink.

Now for the specs. The device features a 4.8-inch Gorilla Glass 3 screen, with a resolution of 720 x 1280. That works out to a pixel density of 306ppi. An octa-core 1.7GHz MediaTek MT6592 CPU is under the hood with 1GB of RAM inside. 16GB of native storage is on board, and there is no microSD slot. The rear-facing camera is 8MP and a 5MP "selfie" camera adorns the front of the handset. The 2050mAh battery keeps the lights on, and Android 4.4.2 is pre-installed. Just in case you had some concerns, the metal frame prevents the Tornado 348 from bending, even though the device weighs in at only 95.5 grams.

Pocket mode will supposedly keep you from butt dialing 9-1-1, or any other number for that matter. And if the phone is ringing, you can answer it automatically by picking it up and bringing it to your ears. Check out the rebranded Gionee Elife S5.1, now offered as the Kazam Tornado 348. We have a couple of videos and a few still shots for you to view. Just make your way to the video slideshow below!

The thinnest smartphone in the world 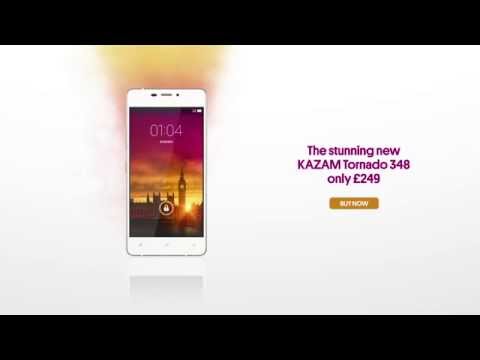