Acer continues making some of the most affordable tablets from a brand you have actually heard of, and the Iconia B1-720 comes singing the same tunes. An extremely affordable 7-inch tablet running on Android 4.2 Jelly Bean, it builds up on the base set by last year’s B1.
This new one comes under the B1 name, but it's the B1-720 model name that you should look for in case you have trouble making the difference. It’s also thinner and lighter, and while there are quite a few compromises that have to be made to arrive at that low price, there’s a lot to love about the new Acer Iconia B1-720. Acer Iconia B1-720
The Iconia B1-720 is a plastic creation, and you should not be surprised - it’s too affordable for better materials. Nonetheless, it feels just slightly hollow, with none of the creakiness some other similarly priced tablets have, and it’s very lightweight at just 320g (0.7 pounds, less than a Kindle Fire HD). The B1-720 has got a nice textured finish on the back, with a rubbery soft touch feel. It fits nicely in the hand, and it’s fairly compact.

In terms of buttons and slots, you have the lock key on top and the volume rocker on the right, there’s a microSD memory expansion slot on the left, and a 3.5mm headset jack on top. Acer has moved the microphone to the front (opposed to it being on the back of the original Iconia B1) for a better audio experience. The loudspeaker is also moved to the front, right below the display. Front-facing speaker
The Iconia B1-720 makes one big compromise to arrive at its low price and it’s in the screen department. The tablet features a compact 7-inch display with a mediocre 1024 x 600 pixel resolution, but it’s the actual colors and screen quality that’s an even bigger issue. Acer is using a TN panel here, a cheap technology that has very washed out looking colors and poor viewing angles. Color accuracy is also way off, and the screen itself features a little bit wider bezels thatn the standard nowadays. Textured back
Under the hood, the tablet comes with a 1.3GHz dual-core MediaTek (Cortex A9-based) processor. It gets the job done well for basic tasks like just reading your email or browsing the web. The experience around the menus is virtually lag-free (according to our short time with the device, we’ll test it more in the near future), which is always a good thing.

In terms of memory, the tablet will likely ship in a 16GB and 32GB versions, and there’s a memory expansion microSD card slot on both, so no issues with storage limitations.

The Iconia B1-720 is a Wi-Fi-only model. There is no 3G, 4G, or any cellular data connectivity on board, but that’s something one would expect for such an affordable device.

The tablet does feature a front-facing camera that you can use for video chats and the occasional selfie, but there is no rear-facing shooter that you could use for higher-res image capture. We cannot really complain - a tablet and a cheap one would hardly be the ideal device for taking images.

The Iconia B1-720 price was first set at $130, but it seems that Acer is still thinking about the final price, as it did make a last-minute change in the price of the higher-specced 8-inch Iconia A1 to $150. If the current $130 Iconia B1-720 price stays, that would make the price gap between it and the A1 (two hugely different devices) too small, so we would not be too surprised if the B1-720 launched at a lower than $130 starting price. Even at this price, we do expect a lot of people to pick it up as it’s a very cheap tablet from a well-known company. Sometimes, that’s all it takes. 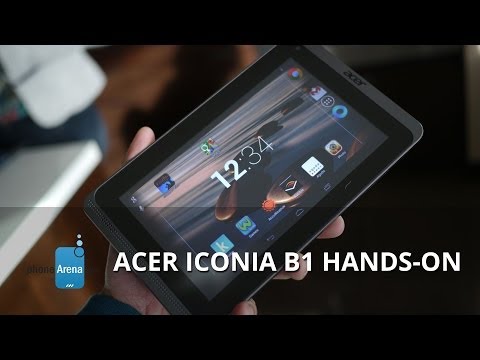 Dual core mediatek? It's not different from its predecessor

Second that. I actually thought about mentioning the 2012 Nexus 7 as an alternative in the article as well.

Google N7 is not widely available tablet. In my country it's easier to find Acer tablets than Google Nexus tablets, the Nexus family is one of rare products in my country(Indonesia).