Update: You can now read our Huawei P9 review!

Getting noticed in the smartphone space is increasingly getting tough, especially in the Android space, now that the Samsung Galaxy S6 has set the bar for everyone else. Last year, Huawei managed to pique our interest with the Ascend P7, its flagship phone that showed to us all that the company is capable of delivering a quality performing smartphone in a premium package – while also retaining a pretty svelte chassis. Staying relevant is key to long term growth, so knowing that, the company is hoping that its latest effort is enough to remain competitive.

With the announcement of its latest flagship handset, Huawei has shed the Ascend moniker, choosing instead to go with a direct approach by merely naming it the P8. From the looks of it, Huawei has been cognizant to improve the P8 in several key areas, like its specs and design, allowing it to keep pace with what the competition has announced thus far. However, even with all the diligent work put in by the company to keep it in contention, is it enough to actually rise above and reach the same level of prestige that’s attached to the devices we get from Apple and Samsung?

Look ma, no hump! Not only is the camera flush, but the Huawei P8 features a premium design with a svelte chassis.

Aesthetically, the P8 looks closely similar to its predecessor in the Ascend P7, so the same tradition to offering a premium design carries on with this. Sporting a hard lined design, one that’s uniformly flat both on the front and back, there’s clearly an edgy look to the entire package – accentuated further by its beveled edges. What’s most profound, though, is the premium touch that we get from the design with its new glass and metal design.

Going with this type of materials, it incrementally gives the phone a sturdier feeling construction than its predecessor, but at the same time, too, it gives it a substantial feel in the hand to make us know it’s solid. Technically, it’s longer, wider, and heavier than the Ascend P7, but the company was able to shave off just a smidgen off the phone to reach a profile thinness of 6.4mm, which eclipses the iPhone 6 and Galaxy S6 in the process. What’s even more impressive, though, is that there’s no hump near or around the rear camera – making it completely flush, a rare achievement of late, it seems!

Holding the P8, however, there’s a subtle sharp feel due to those beveled edges around its trim. It’s not as bad as some other handsets, but it’s still noticeable nonetheless. The achievements are commendable on so many levels! Its premium design, svelte chassis, and uniformly flush surfaces, all point to the obvious that Huawei is more than capable of coming up with good designs.

In keeping true to the design language of its predecessor, the P8 features the same set of ports and buttons around its trim – even in the same locations as before too! These include the 3.5mm headphone jack and noise cancelling mic on its top edge, the power button, volume controls, microSD slot, and SIM slot on its right, and the microUSB port, microphone, and speaker along the bottom side of the phone. Looking intently more on its bottom edge, we can’t help but to draw comparisons to the iPhone 6, seeing that the microUSB charging port is flanked by screws.

Again, we have to applaud Huawei for keeping the P8’s surfaces flush – while also being accompanied with a premium finish. When it’s laid flat on either side, there’s no odd section that’s raised due to the camera lens sticking out. It’s almost mind-boggling, but it’s rare nowadays to find phones that have uniformly flush surfaces like the P8, so we really appreciate that one particular design trait. Of course, that may be at the expense of camera quality...

The display sports several improvements over its predecessor, but it’s still far from the class leading qualities of other displays.

In an age where quad-HD screens are increasingly becoming the standard for most flagships, Huawei has chosen to instead outfit the P8 with a 5.2-inch 1080 x 1920 JDI IPS-Neo display. Of course, 1080p resolution is more than effective on a 5.2-inch sized screen, allowing for strong details for both near and far viewing.

Paying our attention to this evolved IPS-LCD based panel, Japan Display’s IPS-Neo technology delivers the goods in giving this new display some respectable qualities like blacks that are truly black, making for a nicely contrasty look.

At the same time, too, the panel clearly favors a more saturated color reproduction when the display is set to the default color temperature setting, which is made more profound by how the color values fall in the color gamut chart. Even though it’s an improvement, the ~7200K color temperature of the display gives the entire panel a colder look – though, it can be adjusted in the settings. For the most part, this IPS-Neo display exhibits enough vibrancy to retain our attention.

Another improvement to the display is its brightness output, which now reaches 503 nits. Although it’s far from being the brightest, it’s still quite visible outdoors when the sun is out. Tilting the phone a little doesn’t distort the screen, but at widest angles, we can discern a slightly more washed out look. Overall, it’s a solid effort, but we wouldn’t say it’s perfect just yet. 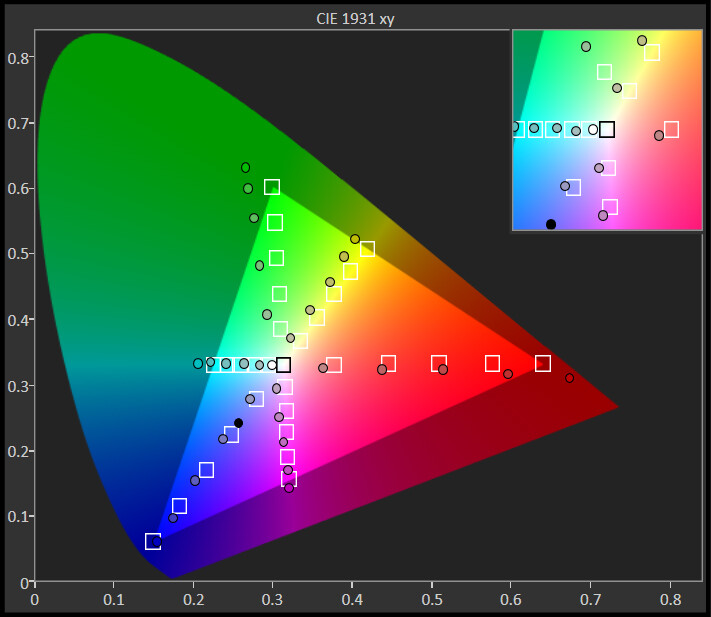