Gyro Skate: An Android app that involves tossing your phone around, literally

posted by Maxwell R.
Dec 10, 2014, 4:37 AM
Everyone does it right? Tossing and flipping your $500-plus smartphone around in an effort to mimic the flips and swings that a skateboarder might do on his or her ticked-out deck.

Gyro Skate, developed by a German programmer and graphic designer partnership in their spare time, is an app that leverages the hardware gyroscope in your late model Android smartphone, and basically scores just how rad you are flipping and spinning your smartphone like a skateboard might if it were under the feet of someone capable, like Tony Hawk.

To that end, the app has a really big disclaimer before you can even begin playing the game. The game offers you visuals of how to toss your precious in the air just like a skateboarding trick. Of course they admonish you to do so over a cushion, or a bed, but with great risk comes great reward right?

Originally, the app was developed for iOS, but Apple would not let such a potentially iPhone-destructive app anywhere near iTunes, so they re-made it for Android. The app definitely works with the Nexus 5, but the developers say it is a “no-go” for the HTC One. There is a free demo available to try before you buy the full featured $1.99 version.  That way, you can see if it works on your phone or not.

Have fun, but don’t say we didn’t warn you if you shatter your device while in the middle of pulling off a rad trick like the 360 flip over concrete. Links to the app in Google Play, along with images and videos are below. 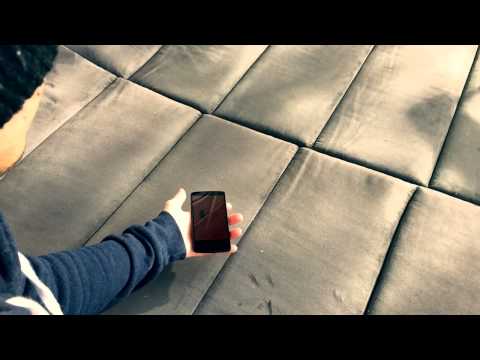