It's been over a year since we first came across the Oppo Find 5 – the company's flagship that really put the otherwise obscure company at the time on the map – but here we are, with the Find series successor in the Find 7a. In fact, Oppo has two otherwise identical flagships up for grabs – the Find 7, and the Find 7a that we have at hand.

The more affordable version, the 7a is the slightly less powerful model of the two. It's got a typical 1080x1920 pixel resolution display instead of a QHD (1440x2560) resolution one, and it makes use of slightly less potent components in the processor, memory and batter departments. At $499, this makes the Find 7a $100 cheaper.

Yet, despite its relative inferiority to its higher-powered sibling, the Find 7a still is every bit a desirable flagship. But is it more desirable than what the competition has to offer? Let's take a look.

The Find 7a is a looker! Thankfully, that didn't come at the cost of proper ergonomics – it is very comfortable to hold.

If nothing else, Oppo has always striked us as a company that is very conscious of design, down to the finer details. With the Find 7a, the company reinforces that feeling – we have clear-cut lines and an overall simplistic design that certainly appeals to the eye. Frankly, and despite failing to mount a challenge against aluminum-clad phone like HTC's One, the Find 7a definitely begs no questions – its high-end beginnings are obvious even to passersby.

So what material, then, is responsible for the corpus of the 7a? Unsurprisingly, it's made of polycarbonate, though the chrome ornaments seen with the frame, the buttons on the side, and even the camera ring, do add to the overall beautiful and sturdy construction of the phone. The plastic rear shell has an intricate mesh texture to it, helping with the grip. Overall ergonomics are pretty decent, too, considering the size of the phone (6.01 x 2.95 x 0.36 inches (152.6 x 75 x 9.2mm). When put side-by-side with the 5.7-inch Galaxy Note 3, for example, the Find 7a proves slightly taller, but noticeably narrower. That said, the Find 7a is notably larger than the Galaxy S5 and HTC One M8.

At the front, you have medium-sized bezels, with a set of capacitive navigation keys and an inconspicuous rainbow-shaped LED notification light on the bottom. Looking at the 7a sideways, we have the power button on the left, while the volume rocker took to the right side of the frame. Unfortunately, these are rather flush with the surface, and offer minimal travel. Worse yet, it feels like they're a little sticky.

The display is a small defeat for Oppo – the color temperature is too cold, and we couldn't make out the screen easily with the sun over our shoulder.

Oppo has chosen one of JDI's displays for the Find 7a – a 5.5-inch IPS panel with a resolution of 1080x1920 pixels, or a density of 401 ppi. This ensures a crisp viewing experience, but a trained eye will quickly notice discrepancies in some areas.

For starters, the display on the 7a, at 9531K, is very cold, so whites are not white at all, and even differing shades of gray are blue-ish. Due to the sub-optimal gamma (2.4), colors rendered by the screen are noticeably less-luminant than the actual target colors. Indeed, specific colors like green, are consistently incorrect, lacking a natural spread when it comes to the different shades of the color. Nevertheless, it's imperative to understand that these discrepancies are not extreme, and the Find 7a's screen is actually nice looking overall.

The screen's otherwise decent maximum brightness of 455 nits actually doesn't mean much when outdoors with the sun shining over your shoulder. In those scenarios, the reflective glass on top proved rather too reflective, and making out the UI was rather hard. 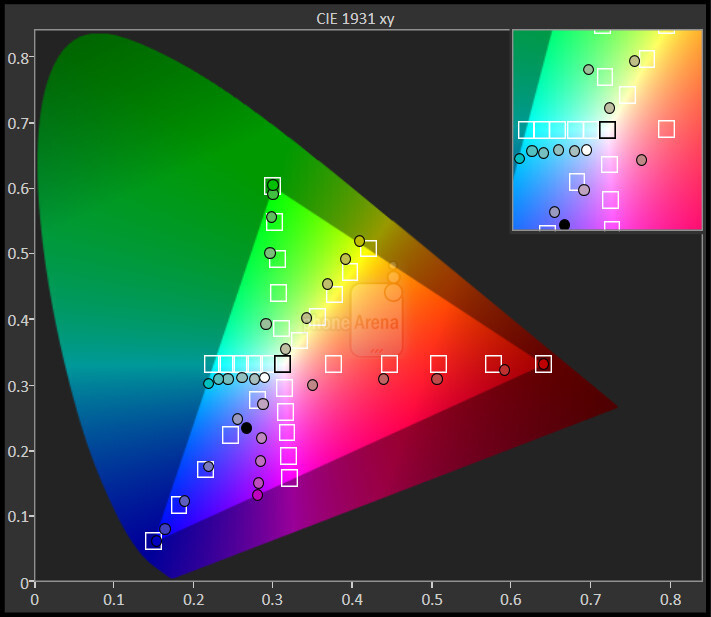