Despite that Huawei's handsets are still mostly confined to the vast Chinese market, last year the company hinted about its budding international ambitions with the Ascend P6. It did sport a premium design, and was the thinnest phone at the time, while Huawei propped it up with a heavy marketing campaign. This year the company doubles down on the design paradigm of the P6, introducing the steel-and-glass Ascend P7. The phone sports a chassis that is just 6.5mm thin, but keeps the weight of its predecessor, despite that the screen has grown up from 4.7” to 5”. Last year's Ascend P6 was a looker, but was marred by some weak spots, like the camera quality, and the poor abilities of Huawei's homegrown chipset. With the Ascend P7, Huawei keeps betting on its own processor line, but with a more powerful quad-core member, and has upgraded the screen, camera and internal memory departments Naturally, we also have the current Android 4.4 KitKat on Huawei's new flagship. Can these enhancements take the P7 to smartphone glory given the cutthroat competition it will be up against? Let's find out...

The 6.5mm thin steel-and-glass chassis of the Ascend P7 makes it one of the most impressively designed phones out there.

The Ascend P7 is one of the thinnest and lightest handsets around, and we are not just talking 5-inchers here. The 0.25” (6.5mm) thickness, and the 4.35oz (124g) of weight are even more impressive considering that the phone's unibody chassis is made of Gorilla Glass 3 on the back, with a metal rim surrounding the sides. The iPhone 5s, for example, whose steel-and-glass design the Ascend P7 arguably follows, is thicker, and only a tad lighter, but sports a 4” display, against the P7's much larger, 5” panel. Huawei's finest feels premium in the hand, due to the design materials used. The corners, edges, and the whole bottom, are rounded, so the phone is also comparatively comfortable to hold, given that other handsets with such a design feel rather “edgy”. The only gripe we have with the design is stemming precisely from its svelte demeanor, as picking it up from a table turns out to be a bit finicky.

The metal power/lock key and volume rocker on the right, are well-placed, feel sturdy, and offer a good tactile feedback when pressed. Beneath them are the memory card and microSIM trays, flush with the side surface, and very easy to take out with a pin, or be pushed back in. Pressing the volume rocker down quickly two times evokes the Ultra Snapshot function, which fires up the camera and takes a picture from a locked screen for a second or so, which works exactly as Huawei advertises.

The P7 flaunts a bright and vibrant 5” display.

With a 5” 1080x1920 pixels display, Huawei Ascend P7 offers a good-looking screen that has very good 445ppi pixel density, making text appear crisp, and details smooth. The color representation is largely accurate but the screen's color temperature is way too cold on its default settings. We measured 8405 Kelvins, which is quite the deviation from the reference 6500K, making white actually blueish. The phone offers a slider to adjust the color temperature, too. The phone's 463 nits of peak brightness are at the mark for a good display, and the screen reflectance is kept in check, so we are pleased with the outdoor visibility of the Ascend P7. Viewing angles are rather good, too, with the vertical one a bit better than the horizontal, but that is only visible when looking at the panel from the extremes. The screen has a sensitive touch layer, which allows you to use it with gloves – an option that can be toggled on and off from the display settings. 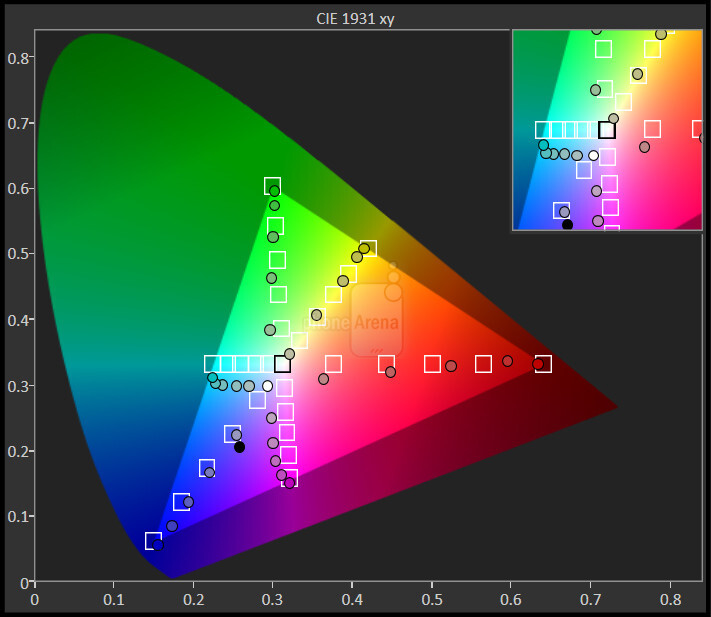