We’ve seen Verizon release quite a few 4G LTE Android smartphones over the past couple of months, from the high-end Motorola DROID BIONIC and HTC ThunderBolt, to the entry-level Pantech Breakout. But there is one feature that all of them have been missing – a physical QWERTY keyboard. Enter the Samsung Stratosphere, which just happens to include a handy slide-out keyboard. This combination clearly targets the device to individuals that want fast data speeds, and also prefer a real keyboard as opposed to using the on-screen one.

The overall appearance of the Samsung Stratosphere draws closely on other Samsung models, such as the last year's Fascinate, but it is a bit more refined. Even though the Stratosphere has a plastic shell, it feels more durable and less “plasticy”. Gone is the slippery battery cover on the back, as the Stratosphere has soft-touch coating with a grooved texture, which allows the phone to feel more secure in your hand.

You can compare the Samsung Stratosphere with many other phones using our Size Visualization Tool.

On the front is a 4” WVGA 480x800 pixels resolution Super AMOLED display (not “Plus”), which seems to be what appeared on the Fascinate. Images look good on it thanks to the saturated colors, and text is clear, but it could be way better. Above the display is a 1.3MP camera for self-portraits or video chat, and at the bottom are the four touch-sensitive control buttons.


Sliding a phone open to access the QWERTY keyboard should be easy, but we found the sliding mechanism on the Samsung Stratosphere requires more pressure than most other QWERTY phones (such as the LG Enlighten and Motorola DROID 3), and we could also feel the keys rubbing on the backside of the display. But once it is open, you are treated to a keyboard with a nice 5-row layout with dedicate number keys across the top. All of the keys have a nice size, and also ample spacing that provides an excellent typing experience, which rivals that of the DROID 3. There are also a few extras, such as being able to use the homescreens in landscape mode when the keyboard is open, and there are even four keys on side on it which mimic the 4 function keys below the display. Overall, we’re quite pleased with using the keyboard, but wish that it slid open and close better. 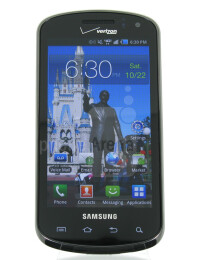 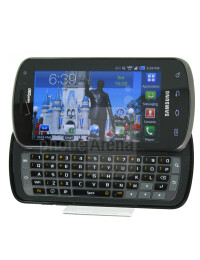 All but one hotly rumored Galaxy Fold 4 and Flip 4 upgrades nearly confirmed
Samsung quietly introduces its latest cheap 5G Galaxy A series phone
HBO Max, Discovery+ to be merged into a single streaming platform
Render of iPad 10 shows changes being made to the entry-level tablet
Musk still willing to buy Twitter under this one condition
Reservations for the Moto Razr 2022 start (in China)