The Alcatel OneTouch Pop 8 is an affordable 8-inch tablet with modest but not dirt cheap specifications. It’s aimed at budget buyers looking for a tablet with the option for mobile data connectivity (we tested a model with 4G HSPA, but there might be a Wi-Fi-only version as well) at a low price. The OneTouch Pop 8 delivers just that, and it does so in a very compact footprint, boasting a display with very tiny bezels and a thin, elegant body.

Under the hood, there is a quad-core MediaTek system chip that powers a simple and likable custom Android user interface with full access to the Google Play store. Also, you can customize the Pop 8 with interchangeable back covers that add some lively colors to it.

On paper, this looks like a fairly well-balanced package - it does not stand out with anything, nor does it suggest any obvious glaring omissions, but how does it all perform in real life, and - ultimately - is this tablet worth buying? Read on to find out.

The Alcatel OneTouch Pop 8 feels airy, with its narrow and thin body, and you can easily grab it with a single hand.

The Alcatel OneTouch Pop 8 feels airy, with its narrow and thin, 0.31-inch (7.9mm) profile and light weight of 0.72lbs (325 g). In fact, it’s features such a narrow screen bezel that you can easily hold with just one hand, and it even fits in some jacket pockets, which is a plus for an 8-inch tablet.

It’s not made of any fancy materials - rather the opposite, it looks fairly cheap with (not so) good old glossy plastic used throughout. It’s the kind of plastic material that catches a lot of fingerprints easily as well. On a positive note, though, the device is fairly well put together with the exception for a slightly hollow spot right in the center of its back cover.

Up front, there is just the screen and no physical buttons - Alcatel is using on-screen navigation keys for this tablet. There is no earpiece either, so you cannot use this for phone calls. As strange as it may sound to some of you, some tablets actually ship with an earpiece that you can use for voice calls.

Looking at the periphery of the Pop 8, you see its only two physical buttons on its right side: there is a volume rocker and a power key above it. We found their position closer to the back of the tablet a bit weird and hard to reach, plus they are a bit on the shallow side. Finally, switching to the left side, you’d see a lid-protected microSD and microSIM card slots.

The 8-inch IPS LCD display is decent, but not great. It has okay colors, but it is not as sharp as notable competitors like the Nexus 7 2013, and it’s noticeably dim.

The OneTouch Pop 8 sports an 8-inch IPS LCD display with a resolution of 1280 x 800 pixels. At such a resolution, it’s hard to read smaller fonts (you’d need to zoom in for better legibility) and you can notice slight pixelization all across - it’s not a deal-breaker, but it’s one area the tablet could have done better.

In terms of colors, the Pop 8 – funnily enough – lacks a bit of pop, as its colors appear a bit muted, subdued, and they are not perfectly accurate either. Thing is, the color gamut on the tablet does not quite match the standard sRGB gamut coverage - it’s a bit narrower.

It’s also hard to use the OneTouch Pop 8 outdoors since its low brightness makes it harder to read the display. Alcatel’s tablet is in fact nearly 20% dimmer than most other tablets.

One final detail that you should know about the screen is that - unlike other popular tablets - it does not feature oleophobic coating, which means that it collects a lot more fingerprints, and can get quite messy (you’d need to get a cloth to clean it up often). 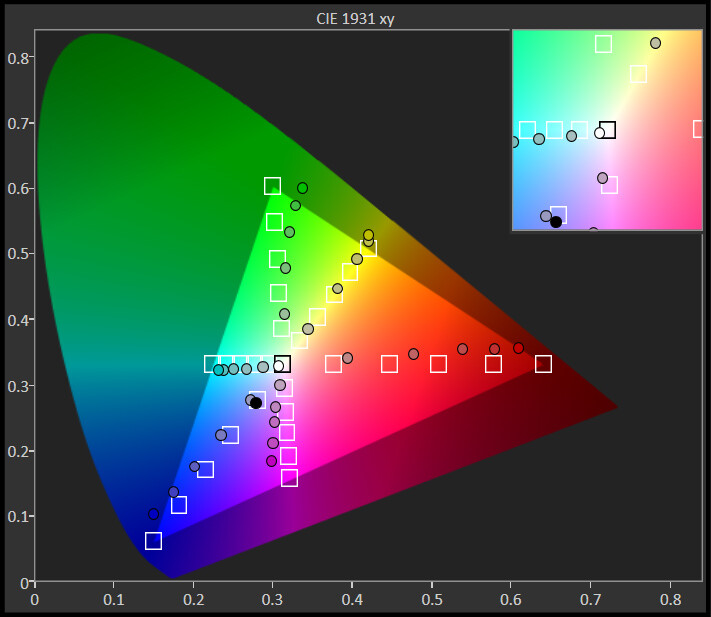