We first saw the Samsung Transform Ultra debut on Sprint’s Boost pre-paid network, but now the midrange handset has made its way to the post-paid side of the business.  The specs remain the same - notably a 1GHz Snapdragon S2 processor, 3.5” display and side-sliding QWERTY- but the software has been tweaked for Sprint service and now features SprintID.  As an upgrade from the Samsung Transform, the Transform Ultra offers a similar feature set that has been refreshed to bring it current with today’s mid-range smartphone standards.

In the box you’ll find a 1500mAh battery, microUSB data cable with AC adapter and a 2GB microSD card.

Following in the footsteps of the Samsung Moment, Intercept and Transform, the Transform Ultra M-930 features a side-sliding QWERTY keyboard behind its 3.5” HVGA display with four physical buttons below.  The Transform Ultra is slightly smaller than the Transform in all directions, measuring in at 4.5”x2.4”x0.55”.

You can compare the Samsung Transform Ultra with many other phones using our Size Visualization Tool.

The phone slides open with a reassuring spring-assist revealing the four row QWERTY keyboard.  The keyboard is well spaced out, with reassuring feedback when you press a key.  We’d prefer the spacebar to be a little more solid though because it felt mushier than the rest of the keys.  There is auto-correct built in, but we found it didn’t work very often ignoring mistakes like “tdst” for “test” but adding missed punctuation, such as an apostrophe.  If you don’t want to slide the phone open you have Swype and the standard Gingerbread keyboard preloaded.


The overall feel of the Samsung Transform Ultra was very good.  The phone fits nicely into your hand either open or closed, and build quality is good.  The slide mechanism glides effortlessly, the buttons along the front and sides offer a nice click when pressed and the textured battery door gives a good in-hand feel.  The materials used feel plasticy, but not cheap.  All-in-all, the Transform Ultra offers a nice design for what you are paying for.

The display is very bright and usable even in direct light.  With an HVGA resolution, images lack crispness and very small text is hard to read, but that is to be expected in a mid-range device with a 3.5” screen.  We didn’t have any issues performing everyday tasks with the Transform Ultra’s display and it was much better than what we found on the ZTE Fury.  It was plenty responsive to our touches and did not miss any keystrokes. 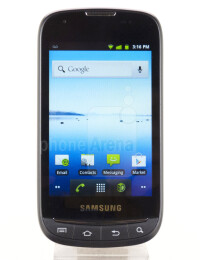 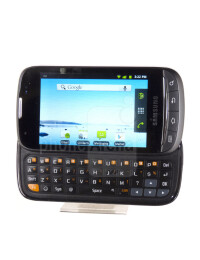