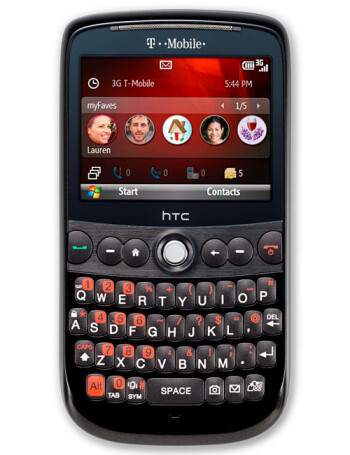 I had this phone for over a year and still have it as a backup.. I wore it out. I am tough on phones. The keys were nicely spaced and easy to use. Did I mention this phone is tough as nails. I rolled over it with a creeper working in my garage and got a scratch on the screen.. that was IT. Never had a problem with the trackball or anything. I feel some that wrote neagtively about the OS just must not understand that WinMo is simple as it gets. They must try to overthink it or something. I never have lag getting to apps and everything worked smooth. Text was easy to get at so were appointments, etc.. notifications were right there for me the works. Great sound quality.. the speaker phone was loud and the mic picked up great. Now you can only get it on Tmos website but its cheap.. Mine finally died after dropping it for the 9th or 10th time.. and then it was the "end" button that was a little flaky. Considering how much trama the phone had been through it was amazing it was still functioning.

The processor is fast meaning Windows Mobile works without a hitch. In regards to other reviewers complaints, this phone is anything but slow. Windows Mobile requires a certain degree of care; it's a computer more than a cell phone. You should reset your phone often, or download a free up RAM app. You should also pay attention to the task manager since most apps do not close at first but rather minimize. You can run ten apps at a time and still have an amazing mobile experience but the phone will start to slow down as more and more processes are being run at once. The amount of RAM packed into this phone is amazing, RAM will dictate the speed of your phone and its multitasking. In any case, this phone is fast, and it can do a lot at once, you just have to learn this phone. It takes time to learn and I would not recommend it to anyone but a mobile enthusiast. I have learned the operating system and my mobile experience is far different than it was when the phone came out of the box. I have the 3vo rom installed changing the interface entirely from what it once was. I use pockettunes as my primary media player since the default Windows media player output bad quality music. I use skyfire and have access to full flash web browsing. I have a gameboy, NES, SNES, genesis, turbografx, game gear, playstation(!), SCUMM, and other emulators. I can play worms world party or dukenukem 3d among other games. I can stream videos from youtube or other internet sources.

This phone was amazing the first time I bought it, but then again it was my first phone and it cost more than a ps3 so of course I treated this like it was the holy grail. After a few months of having it and taking care of it, the track ball on it stopped moving down, I guess it would get stuck, but after a while of sliding my thumb on it it finally worked. Around 5 months later my phone started acting REALLY slow when I typed up some text message, it would basically lag. Then later the "A" key stopped working so I just turned it off and turned it back on, it seemed to work for a few minutes then when I would type up a message it would miss the letter A sometimes or put two A's instead of just ONE, so it makes me sound like a total retard when I send a message to my friends. Now I've had this phone for 11 months now and the A button STILL doesn't work. I'm still not parting with this phone, I wanna use up all my $350 dollars it cost me, but if I DID have money I would've bought another one a couple of months back. Mostly because I need Apps, this phone from what I've seen doesn't have many apps, and it has many useless apps in it when you get it, I've had it for almost a year and I still haven't used over 1/3 of the stuff it has. And I don't even want to get into not getting signal in some very open places.

This phone is awesome!

Ive had this phone for 2 months now and its a great smartphone... It has a great battery life... it lasts about three days and i text all day... The QWERTY keyboard is Fantastic! It has large buttons and they are well spaced. The only problem with this phone is the trackball! im worried that it might fall off anytime and i dont have insurance with T-Mobile on this phone. It Would be the perfect phone if it had a normal D pad... The Internet is also good.. even though i its slow sometimes.

I've owned one for some time and it just sucks, it's slow and you can't watch MobiTV on it and the damn thing keeps freezing on me then to top it off this it won't play all the video formats it said it would on the HTC website, like ASF, MP4, 3G2, M4V, AVI

I've owned several smartphones in the past year, my latest being this variant of the HTC Snap. The hardware is beautiful, even besting the sleek Blackberry Curve 8900. Its slim, has a matte rubber on the back, and feels very sturdy - noting on its excellent build quality. The keyboard looks great and functions well too. However, the keys are a bit too hard to press and the text/email compose time suffers.Despite the incredible hardware, the software is absolutely atrocious. It runs Windows Mobile 6.5 Standard. HTC put absolutely no effort in making it trackball / keyboard friendly (as there is no touchscreen). It takes 10+ seconds to get into any applications (if you know exactly where they are). And good luck getting any current applications. Not many developers are developing for this platform.I would equate the Dash 3G with a quality dumbphone - but for someone who needs a smartphone, this absolutely will not suffice.If you already have this phone or are planning on getting this phone, 3volution's custom ROM definitely helps lessen HTC and Microsoft's shortcomings.

I love this phone

I would recommend this phone to first time smartphone buyers. Easy to learn, but a lot more to learn about the phone though. Slim design and great to hold in your hand or in pocket. I love the look of the phone.

10 out of 15 people found this review helpful.