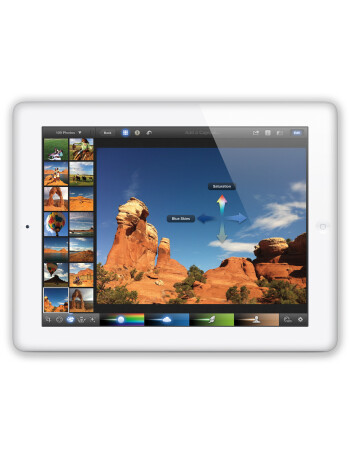 The screen is bright and displays crisp details. The battery is average and can last for about 5 days of normal usage. The loudspeaker and the microphone is good. The aluminium back and glass panel on the front give it a good build quality and hefty feel.

Build quality
9.0
Aluminium back and glass panel on the front give it a quality feel.
Reception
8.0
Good.
Call quality
8.0
I don't make calls too often, but FaceTime works very good even when the other end is overseas.
Internet
10.0
I really enjoy surfing the web with this tablet. Text is readable without zooming in and fast scrolling is smooth. It renders pages really quickly too.
Multimedia
9.0
Watching videos and viewing photos on this tablet is great.
Camera
8.0
Captures small details and pictures have natural colors.
UI speed
10.0
Rarely will there be any sort of lag.
Everyday usage
9.0
I will bring it with me everywhere. The screen is good and has nice color output. Everything makes everyday usage very good.
Text input
9.0
Thumb typing is difficult but it's even possible to type with all fingers when in landscape orientation. The screen is responsive, making typing fairly easy.
Display
9.0
Big screen size with a high resolution. Color output is great too.
Battery
8.0
Average battery life. You can get a week of light usage out of one charge though.

Not the best tablet money can buy !

I used to own the iPad 3 but I found the UI very limiting so sold it and bought a Nexus 7
I must say , the Nexus 7 the best tablet i have owned to date and it is much better than the new iPad. The iPad is a good tablet , but its not the best tablet . Its quite a massive tablet and pretty heavy.Sure the display is great and there is a healthy ecosystem of optimized apps but other than those 2 reason , I cant really find a compelling reason to buy the iPad and honestly , your better off with an Android tablet.

Build quality
9.0
Love 'em or hate them, you can't deny that the iPad has a great build quality and it might be a little bit heavy but its very thin and feels great in the hand. Well done Apple !
Reception
9.0
WiFi connectivity was good and I didn't have any issues.
Call quality
1.0
I bought a WiFi only version.
Internet
8.0
Safari is great but it doesn't have quick sharing functionalities and I prefer Chrome.
Multimedia
9.0
The speaker is not the best I have heard but movies look great on that display and so do games.
Camera
8.0
The rear camera is OK. I didn't use it much but when I did it produced decent pics. The front camera however is lackluster.
UI speed
7.0
My friend owns an iPad 2. In my experience the iPad 2 felt a little bit smoother and snapier. Not so that the iPad 3 is slow or something , its pretty quick , quicker than some Android tablets but for an iOS device , it wasn't the fastest and I experience frame drops while playing games like NFS: Hot pursuit and FIFA 12.
Everyday usage
7.0
The iPad fared well in everyday usage but again felt a little bit under powered. iOS is very limiting , and aside from the ton of third-party iPad optimized apps , I cant see its superiority over Android or Windows tablets.
Text input
8.0
The iOS keyboard is great and very quick. The only think I wished is that I could download a third part keyboard from somewhere.
Display
10.0
The display is probably the best tablet display out there. Its very very sharp and colors look crisp and nice.
Battery
7.0
Battery life is OK. Apple says that the iPad 3 gives 10 hours of usage but in my experience i got about 8 hours of usage.

Nice tablet but still needs some work to do.

Apples first ipad was a big hit. so as the second one and they got up to the "The New Ipad." I personally think that that was too much. Apple did awesome job until the 2nd Ipad but not after that. Nothing have really changed except the display and the faster processor. It still is a great tablet but apple should work more and then they should release the revolutionary tablet.

4 out of 8 people found this review helpful.

Best tablet out there and one of the best consumer products overall. Say what you want about Apple, this is a fantastic piece of Technology. The limitations of iOS is the only drawback, but also it's strength. The App Store and Apple user expierence on tablets still blow away Android. There really is a reason why this thing is so crazy popular.

Build quality
10.0
Build quality is overall flawless and fantastic, hands down. It feels like lasting a decade.
Reception
10.0
The WLAN reception is definitely better than on my Galaxy Note. Nothing fantastic, but there is point giving less than ten.
Call quality
10.0
...?
Internet
9.0
Perfect except for the lack of Flash, but I don't miss it much. Safari is a good browser.
Multimedia
10.0
Now my favorite device for music and movies.
Camera
7.0
Without adding arguments for why and why not I do not need a camera on a tablet, this does the job done good.
UI speed
10.0
No comments needed here. Compared with Android... Fantastic.
Everyday usage
10.0
That's what iOS stands for. Pick it up and do whatever you want, don't care about everything else you would care about on a desktop or Android.
Text input
8.0
Apples on-screen keyboard and the dictation function both get the job done very, very good... For a tablet, that is...
Display
10.0
No comment.
Battery
10.0
It depends heavily on the screen brightness, but I can easily get ten hours out of it while browsing with auto-brightness at half, more than twelve hours when on low brightness and, even more impressive, nearly eight hours of very heavy gaming. That's more than enough. I actually never managed to kill this beast in one day. I probably could at higher brightness, but I don't need it.

3 out of 10 people found this review helpful.

The interface is just AWESOME! The iOS 5 is just incredible with iMessage and notification center. In fall the iPad 3 will have Siri which is awesome! The camera is very good like the video quality. The retina display is amazing and it's the major feature on this iPad. The processor is very fast and make the experience of browsing the web and playing games even more fun. Unfortenely, the battery is not quite good, does not support flash and it has no memory expansion.... However the build quality is good, not amazing, it could be slimmer and lighter. Overall, this is a great tablet and I recommend to all of you buying this amazing tablet.

6 out of 11 people found this review helpful.

The iPad 3 is not a tablet you would go crazy about but you wouldn't throw it in the trash either. It has it's pros and cons to balance out what is probably the worst iPad out of the first four. It works, just not as well as the other iPad's.

Overall it's a great tablet. There are a bunch of little things that bother me, but the apps are useful on a great display. For my next tablet, I would probably go with a smaller one, something like the Blackberry Playbook or the Google Nexus 7. For now, this is an excellent entertainment device.

Build quality
8.0
Overall very good. A couple pixels dead, nothing big. Also quite heavy and bulky.
Reception
6.0
It doesn't connect to Wi-fi very well compared to my laptop.
Call quality
4.0
Facetime calls keep bugging out. Might be the network, might just be that the ipad isn't meant for calling haha.
Internet
8.0
Surfs the internet beautifully.
Multimedia
7.0
Good for watching videos and listening to music. Not the best sound quality, but that's about it.
Camera
3.0
The cameras are actually pretty poor for such a large and expensive device.
UI speed
7.0
Usually quite good, but when it heats up, it slows down.
Everyday usage
5.0
It's a bit too big and bulky to take everywhere.
Text input
5.0
Better than the iphone simply due to the size, but not very good. My friend has an HTC phone that has excellent tactile feedback that I think is really helpful.
Display
8.0
A bit hard to see in the sun, but that's to be expected
Battery
4.0
Okay this has got to be just me, because my friends have no problems with the battery. Somehow my battery drains really quickly (5 hours on a good day).

Just came from an android tablet which had its merits but I couldn't get pass the horrendous tablet optimized app selection. This device has its flaws, but it is a better experience than what I had on android.

4 out of 7 people found this review helpful.

Gazelle paying as much as $355 for a used Apple iPad Air prior to tomorrow's Apple event
iOS 8 release date and time: Available now!
Which iPhone and iPad models will get iOS 8? Apple posts iOS 8 release details
Apple releases iOS 7.1
BlackBerry grabs 98% of new Pentagon management system
Apple clings to the past with the iPad 2
Apple iPad owners trade-in their current slates prior to unveiling of new models
How to download and install the iOS 7 update to your iPhone, iPad or iPod touch